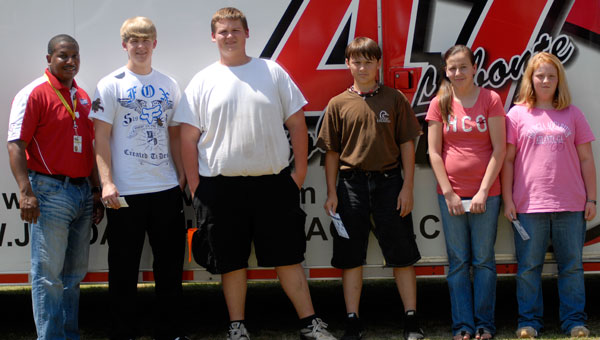 VINCENT — Troy Datcher remembered being caught off guard by a question from Vincent student Bradley Mann following his speech at a school assembly last December.

“‘Can I have two tickets to the Talladega race?'” Mann asked Datcher.

Datcher, a Vincent native who serves as the director of sales for The Clorox Company’s corporate sports marketing department, isn’t one to break a promise.

Datcher fulfilled his promise of a pair of tickets to Mann, and delivered five other pairs of tickets to high-achieving Vincent students during a visit to the school May 4.

Brad Watson, Ryan Childers, Shawnee Bryant, Hannah Davenport and Morgan O’Steen each received a pair of tickets after winning a school-wide competition, which rewarded the top five students who had the biggest increase in the grade-point averages in the past quarter.

“It was the best quarter for grades we’ve ever had,” Minnick said.

Datcher, who also brought a stock car driven by Bobby Labonte in past NASCAR races to display on the Vincent football field, said he felt it was a great way to give back to the community that helped him reach his dreams.

Datcher said he’s living proof that children in the Vincent community can achieve their career goals if they work hard and take advantage of leadership opportunities in front of them.

“It’s really all about the fact that you can get anywhere from here,” said Datcher, who lives in Oakland, Calif. “There’s no reason you can’t achieve anything you want.”

Datcher said he is heavily involved with The Clorox Company’s partnership with NASCAR, the National Basketball Association, as well as Major League Baseball’s Oakland A’s. Datcher also said he is in contract negotiations with the Oakland Raiders of the National Football League, as well.

Datcher, who said he attends approximately 15 NASCAR races annually, had his interest in the sport peaked when he was named the business manager for STP products and he worked closely with NASCAR legend Richard Petty.

“(Petty) has such an engaging personality,” said Datcher, who was a member of the Yellow Jackets’ state championship track and field team in 1986. “He drew me into the sport.”

Datcher, who received a Bachelor of Arts degree in political science from Gettysburg College in Gettysburg, Pa. in 1990, was also a member of the band and Future Farmers of America as a student at Vincent. Datcher was presented with a leadership award by the Gettysburg College chapter of the NAACP in 2009.