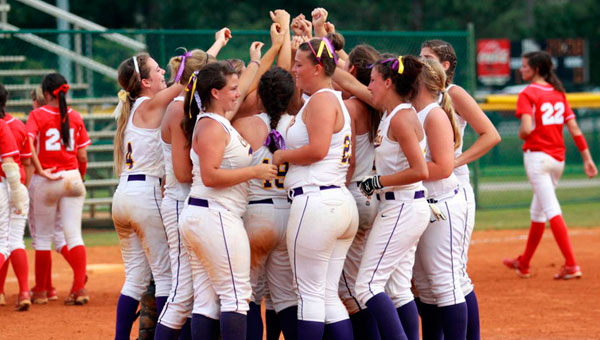 MONTGOMERY — Cornerstone Christian School senior Jana Kelbie Armstrong promised herself she wouldn’t let her emotions get the best of her leading up to her final trip to Lagoon Park for the Alabama Independent Schools Association Class 1A state tournament.

Her ability to control her temperament went out the door when her father, Cornerstone Christian coach Mark Armstrong, uttered a simple phrase during a practice session a few days ahead of the state tournament.

“He told me he was proud of me,” Jana Kelbie recalled. “I swore I wouldn’t cry, but I couldn’t help it.”

The father-daughter combination, along with teammates and assistant coach Joey Miller, wrapped up the season May 5 with an unprecedented sixth consecutive AISA Class 1A championship following the Chargers’ 8-0 win over rival Coosa Valley Academy in the title game.

Mark Armstrong, holding back tears, struggled to find the words to describe his emotion following the championship victory.

“I know I don’t deserve it, but I’m so thankful,” Mark said. “It’s been an unbelievable time.”

Jana Kelbie, who said she can remember being called on to pinch run in games six years ago, said she can’t believe her playing career is now in the books.

The senior went out on a high note, earning the game’s most valuable player honors after picking a complete-game shutout in the circle.

Fellow senior Destiny Dillard, who was named to the AISA Class 1A all-tournament team along with Allie Toney and Brooke Calma, provided the highlights offensively for the Chargers (24-4) as she finished 3-for-4 at the plate and drove in four runs in the victory.

Armstrong said the Dillard and his daughter helped set a foundation for the Cornerstone Christian softball program for years to come.

“They know what to say and do,” Mark said. “They keep the team going in the right direction.”

Jana Kelbie, who has played softball with Dillard since the age of 5, said the two plan to stick around and help future Chargers.

“We’ll be here to watch them,” Jana Kelbie said. “I know they’re going to get tired of us.”