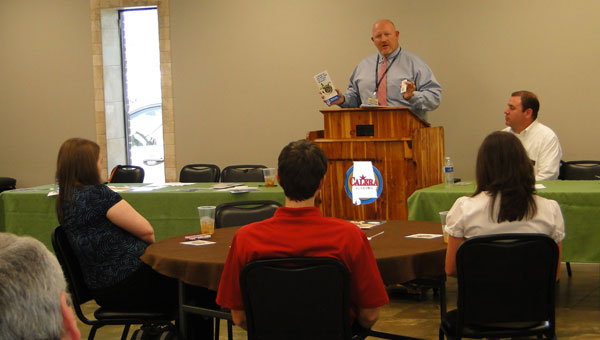 “Lots of people don’t see addiction as a disease, but I do because no one would choose that kind of life and the problems you have with it,” Layton said. “It’s a disease you can control just as a diabetic controls blood sugar when they stop eating sugar or a smoker controls emphysema when they quit smoking.”

Layton choked up reporting 13 children have died as a result of drugs in the past three years. Children make a decision if they will use alcohol or drugs by the ninth grade, so it’s up to parents to talk to their kids about what is expected of them. He commended Calera High School’s proactive steps to drug awareness and noted he’s given more presentations for its athletes, parents and faculty than any other school in the county.

“Our society is ever changing and drug related incidents in schools are higher because of the increase in students,” he said. “Ten percent of the population is going to suffer from alcohol and drug addiction and there’s nothing you can do about it except educate kids and parents.”

Layton said 75 percent of patients at Bradford are addicted to opiates, which present the greatest challenge for recovery. Heroin is rampant in our communities. Most heroin addicts started out on prescription medications and moved on to heroin because it’s inexpensive.

Because of health care reform, Bradford is using its outpatient office in Calera to become more aggressive in controlling the drug population by educating the public and training supervisors to identify drug use in the workplace. Early intervention is key to the success of drug recovery.

One out of 10 people have an alcohol or drug problem. If you know someone with a drug or alcohol problem, contact Layton at 205-329-3663 or llayton@bradfordhealth.net.