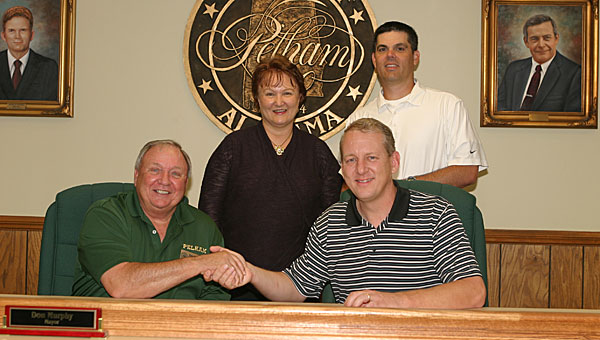 Homeowners in Pelham’s Oaklyn Hills subdivision will be working to create a neighborhood park and green space after the city sold a pair of lots to the neighborhood’s homeowners association.

Pelham officials closed on the real estate transaction with the Oaklyn Hills Homeowners Association on May 4 at Pelham City Hall. The city sold a pair of undeveloped lots off Rolling Hills Drive for $5,000 apiece.

“I think it was a good deal for both us and for the city,” said Oaklyn Hills HOA President David Fielding. “We were able to get the lots for $10,000, and it was able to give some revenue back to the city.”

Pelham received several undeveloped lots in Oaklyn Hills – along with the bond money the original developer put up – as payment to complete the neighborhood’s roads after the developer went bankrupt.

Pelham Mayor Don Murphy said the two lots sold to the HOA were unsuitable for real estate development, but said they will work well as a neighborhood park.

To keep the park private to neighborhood residents, the city had to sell the lots to the HOA instead of donating them. Had the city donated the lots, it would have required the park to be open to all Pelham residents.

“We sold it to them at the minimum price,” Murphy said.

Fielding said he and other Oaklyn Hills residents approached the Pelham City Council last year to discuss selling the two lots to the HOA after the original developer “promised” a neighborhood park.

“That never came to fruition, so we decided to take that on,” Fielding said. “The lots weren’t buildable, so why not use them to benefit the neighborhood?”

Fielding said the HOA is preparing to launch a fundraising campaign to purchase playground equipment, and will be working to create a flat “green space” on the lots to allow kids to play soccer, football or other sports.

By NEAL WAGNER / City Editor A Thompson High School wrestler who was severely injured in an April 30 wreck... read more