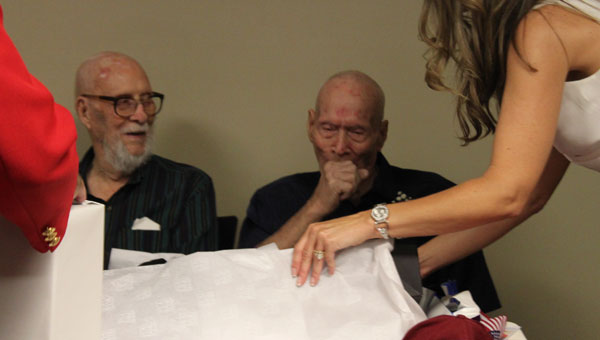 Willam Posey, left, with his brother, Richard, sees his Marine Corps dress blues for the first time as he attends his book signing at Parnell Memorial Library May 7. (Reporter photo/Christine Boatwright)

On May 7, Posey had a dream fulfilled.

Posey, who was born in Back Creek and now lives in Montevallo, had written a book in 1979 about his WWII experiences, but never had the book published. His book, titled “Dress Blues,” concludes with, “I am proud to be able to say, ‘I was a Marine,’ though I never did get those blasted dress blues!”

When he told his Southern Care Hospice nurse, Ollie Munford, about his book and his desire to see it published, she took the manuscript to Mara Tierce, community relations director of Southern Care in Clanton.

“Ollie came in and said, ‘Mara, we need to get this published,’” Tierce said.

Following the discussion, Tierce met Dixon Brooke Jr., president and CEO of EBSCO Industries, at a South Shelby Chamber of Commerce luncheon. When she mentioned the book, Brooke told Tierce to contact his assistant. In the end, EBSCO published Posey’s book for family members, then printed a second time as word spread.

Tierce then got in touch with Robert Horton, public information officer for the Department of Veterans Affairs. She invited Horton to a book signing she set up for Posey in Montevallo, but their conversation led to something more.