‘The King and I’ lights up CHS’ stage 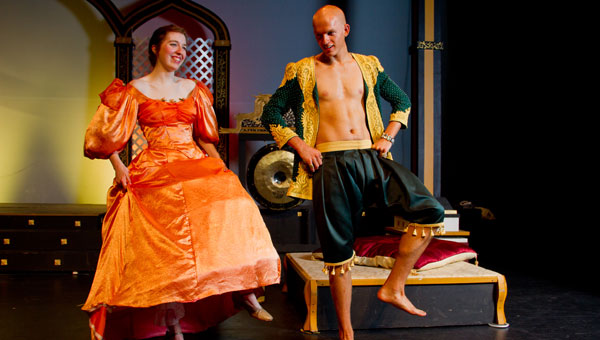 Laura Thomas and Ben Shea perform in Chelsea High School's production of 'The King and I '. (Contributed/Rachel K. Ivey)

CHELSEA – The Chelsea High School theater program brought a musical to the stage for the first time in seven years during a recent performance of “The King and I.”

“We began auditions in January and began rehearsing soon after,” said CHS theater teacher Francie Gardner. “We started on the music. This was the first time our choir director worked as a music director.

“We brought in a choreographer from Southern Dance Arts in the Pelham/Alabaster area. She started doing choreography for the few dance numbers,” she added. “’Uncle Tom’s Cabin’ is the ballet in the show, which is a delightful piece, but quite an undertaking.”

Gardner said she had about 50 students in the show, including technical theater students.

“As we progressed through the music and the basic choreography, we added the acting and the blocking,” she said.

Gardner became the theater teacher this year after she stepped down as president of South City Theater.

“It was an incredibly strong program coming in. It had a thriving program. The kids have been incredibly welcoming,” she said. “My teaching style is a little different, and we haven’t done a musical in seven years here.” 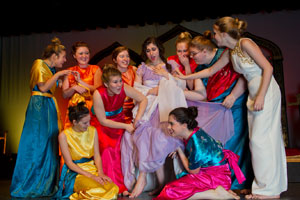 Gardner continues to direct the children’s program with the South City Theater, and used her musical experience with the theater to put together ‘The King and I.’

“We have some gifted singers here,” Gardner said. “They hadn’t had the opportunity to really shine, so I wanted to do something really wonderful.”

Gardner said a challenge was the students’ busy schedules.

“The biggest problem we faced was that the students are involved in so many activities, there’s a lot pulling high school kids in multiple directions,” she said. “A lot of the kids were crossovers between band and some sort of athletic event. It’s a remarkably solid group, and our music director was a great leader in that process. Other teachers and sponsors were very, very supportive.”

The cast performed the musical five times from April 20-22, including one performance for middle school students.

“Everybody really helped. It was amazing to see how many people helped us get this off the ground and make it work,” Gardner said. “We had a great response. We brought a group up from the middle school for our closing performance. They were amazed. It got them excited about coming up to high school.”

Eleanor L. and J.A. Brown Jr. cut the ribbon to dedicate the new collaborative learning room at the University of... read more