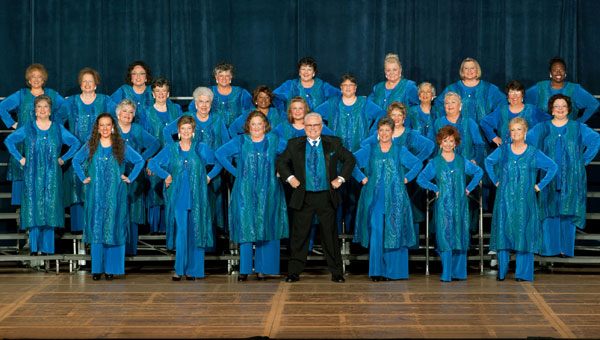 Sheena Griffin, end of first row, left and Debra King, third from left on row three, pose for photos with the Harmony Hills Chorus in Chattanooga, where they won top honors in the “Small Chorus Division” of Region 23 Sweet Adelines competition. They also placed third overall in competition with both small and large choruses. (Contributed)

Two local women are part of a choral group that sang its way to first place in recent competition in Chattanooga, Tenn.

The cousins grew up in K-Springs/Chelsea, and received their early vocal training at the K-Springs Church of God. Debra, the older of the two, recalls singing each Sunday morning with a group of other children, in the little, white church that still sits beside Shelby County 39. Mrs. Mary Benefield, the pastor’s wife, would call children up front to sing.

She remembers, too, a singing school at New Bethesda Church, led by her “Gram,” Eunice Kendrick Minor, who taught “shaped-note” (Sacred Harp) singing across the county.

The congregation began meeting around 1902 in the home of Tom and Louizie Kendrick at old East Saginaw. In 1911, Tom and wife sold to the congregation — for $10­ — two-and-one-half acres for a building. The congregation later moved to K-Springs School, then built the little, white building before constructing the brick facility across the road. Three years ago they merged with Chelsea Community Church.

Today, Debra and Sheena live in other parts of the county but attend CCC and are active in its ministry.

However, Tuesday evenings find them in Birmingham, rehearsing with the Harmony Hills Chorus.

According to Harmony Hills’ website, the singers “enjoy a friendly, loving, fun atmosphere while working hard to be top-notch performers.”

And their hard work pays off.

At the competition in Chattanooga last month, Harmony Hills also placed third overall. This included larger choruses with 60-plus singers, eight competing choruses in all.

For bookings, information or joining, see Sweetadelineintl.org or Harmonyhillschorus.com or call Debra King at 903-4681.

Carmichael (Contributed) By SHELBA NIVENS / Community Columnist While growing up in Chicago, Vicki Carmichael was always painting something. As... read more