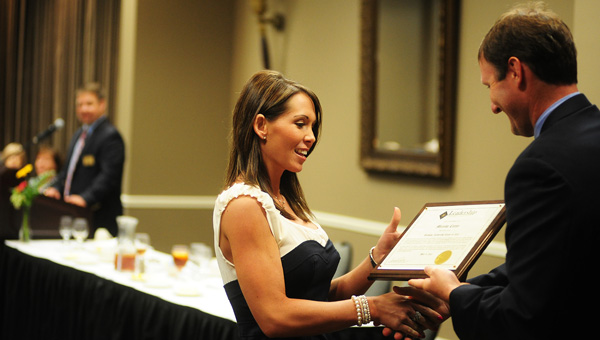 The 35 members of the Leadership Shelby County class of 2012 showcased projects covering middle school drug use, social media and reading readiness during a May 9 graduation ceremony at the Pelham Civic Complex.

During the ceremony, the graduates, who were broken up into three groups for the nine-month LSC session, shared ways they are looking to positively impact the county.

Through the project, the group launched a “Social Power Tools” Facebook.com page and worked to warn local residents about the potential benefits and dangers of today’s social media networks.

The group’s project was titled “Ready Set Read,” and focused on strategies parents can use to prepare their preschool-aged students to read in school. The group launched a website at Readysetreadal.org detailing reading development strategies.

The project aimed to combat drug use among teens, especially seventh- and eighth-graders. Group members launched a website at Nahimgood.org and produced short videos featuring the potential dangers of using drugs such as cocaine, crystal methamphetamine and illegal prescription medications.

“When I was in school, it was high school or even college before you’d have to make that decision (about drug use),” Burns said. “Now, it’s middle school.”

Henry served as the 2012 class representative, and praised the program and the lessons he learned.

“It’s been a distinct pleasure to meet the 30-plus who took part this year,” Henry said. “We need to stop being customers in life. What can you do to help someone else today?”