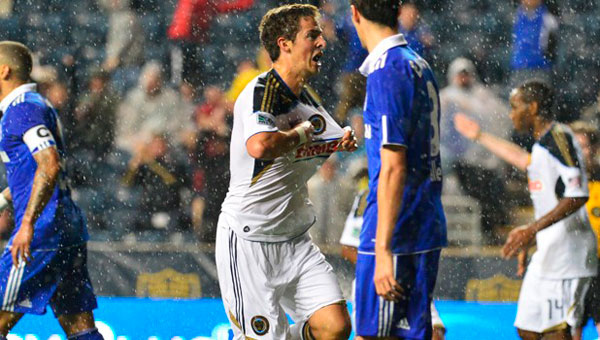 Chandler Hoffman’s first goal in a Philadelphia Union uniform may not have helped his team in its chase for a Major League Soccer championship, but it featured its share of drama nonetheless.

The former Oak Mountain High School soccer standout netted the match-clinching goal in the 88th minute to lead the Union to a 2-1 win over German club Schalke 04 in an International friendly match May 9 at PPL Park.

Hoffman, who has seen action in only one match through the Union’s first eight MLS matches, felt great after scoring the game-winning goal.

“It was a really cool feeling to get that goal,” said Hoffman, the 13th overall pick in the 2012 MLS SuperDraft. “Ray (Gaddis) left me a great pass and I just sent it home. I thought we did a great job overall. It’s always a great thing to play against a side such as Schalke with all of their star players. I think it will help with the whole team’s confidence, sure. I’m thrilled personally.”

Hoffman collected a ball deflected by a Schalke 04 defender and punched it in to lift the Union to victory.

“Antoine (Hoppenot) had the ball out wide and found Ray, who was able to get around the defender,” said Hoffman, who made his debut in the Union’s scoreless tie with Vancouver on March 31. “He has great pace. I was holding my run up a little and saw their center back hanging back. I was trying to find the back post and was able to do that.”

Philadelphia coach John Hackworth was pleased with his offensive attack with Hoffman in the match.

“We think our offense is a little better than what we’ve showed in recent weeks,” Hackworth said.

Hoffman and his teammates return to MLS action May 13 with a home match against New York at PPL Park.