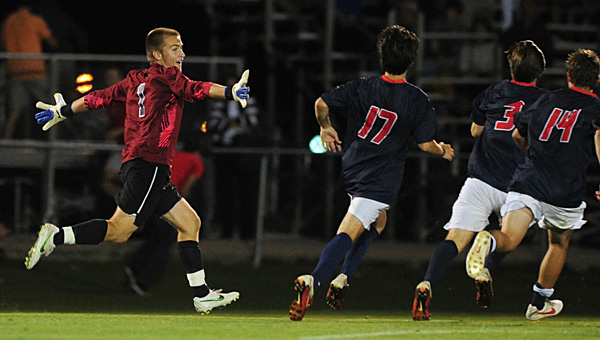 Patridge’s expectations held true, with the Eagles surviving in a 2-1 win settled with sudden-death penalty kick by Gray Johnston and an ensuing save by goalkeeper Brad Louis.

“The boys showed a lot of heart and fight,” Patridge said.

Oak Mountain will face Auburn in the championship match May 12.

Islam Karimov gave the Rebels a 1-0 lead in the eighth minute of the contest following his goal assisted by Sam Irvin.

It took 58 minutes, but the Eagles finally evened the match at 1-1 following a goal by Patrick Carroll in the 66th minute. Carroll’s goal was assisted by Ryan Hall.

David DePriest, Brandt Mace and Mark Green made penalty kicks in the first round of five kicks, while Jack Hopkins, Sam Irvin and Michael Cofield added penalty kicks for the Rebels to send the match into a sudden-death round of penalty kicks.

Johnston made the Eagles’ first kick in the sudden-death round, while Louis made a diving save on an attempt by Ben Collins of Vestavia Hills to clinch the victory.

Patridge said he expected Louis to come through in the clutch for the Eagles.

Patridge was also impressed with Hall, who stepped up the aggression in the Eagles’ offensive attack in the second half.

Chandler Stroupe of Oak Mountain, who received two yellow cards due to unsporting conduct which resulted in a soft red card, is ineligible to play in the Class 6A championship match.