Hornets back in championship match 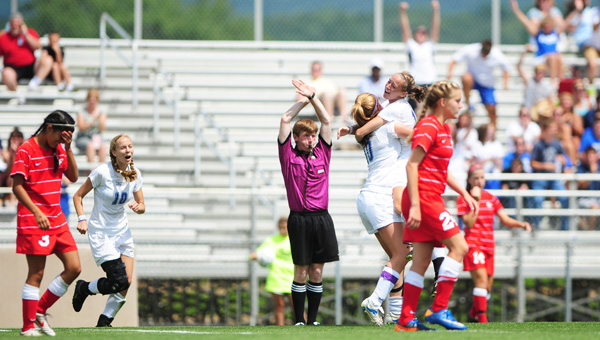 Chelsea players Anna Pifer and Britne Holderby embrace after a goal by Pifer in the second half of the AHSAA 5A State Seminfinal match against Spanish Fort on May 11 in Huntsville. (Reporter Photo/Jon Goering)

HUNTSVILLE — Chelsea High School girls’ soccer coach Jonathan Hammett’s observation stood truthful in both the present moment and the course of time following the Hornets’ 3-0 win over defending Alabama High School Athletic Association Class 5A champion Spanish Fort in a semifinal match May 11 at John Hunt Park, which clinched a return trip to the championship match.

With his team celebrating a victory in a shade outside of the afternoon sun’s rays a few feet away from the final minutes of the playing field where rival school Briarwood Christian fell to Athens, Hammett’s players prepared for their time to shine with back-to-back appearances in the Class 5A championship match.

“We’ve been in the shadows,” Hammett said. “We’ve been young for so long. It says a lot about our talent.”

Chelsea sophomore midfielder Britne Holderby, who scored the opening goal for the Hornets in the semifinal victory, said returning to the title match came down to taking advantage of opportunities against the defending champions.

“It was just about heart and finishing every chance we had,” Holderby said. “We’re improving every year. We’ve played with a lot of heart and desire.”

Holderby gave the Hornets a 1-0 lead in the 24th minute of the match with her unassisted goal.

Chelsea senior midfielder Mara Roberts possessed the ball and beat Spanish Fort goalkeeper Johanna Scott for a goal in the 33rd minute, which helped the Hornets carry a 2-0 lead into the break at halftime.

Chelsea sophomore midfielder Anna Pifer capped the scoring for the Hornets with her unassisted goal just more than five minutes into the second half.

Hammett said the Hornets’ work isn’t done yet. Chelsea will need to give its best effort this season in the Class 5A championship match against Athens.

“Finish stronger than we started” is the team’s motto, Hammett said.

Briarwood's Catherine Cowen battles for the ball against an Athens defender during the AHSAA 5A State Semifinals match on May... read more