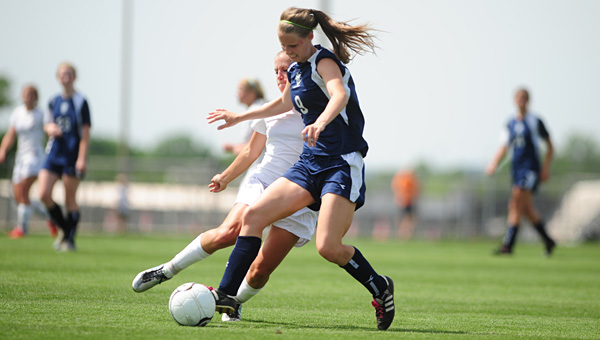 Briarwood's Catherine Cowen battles for the ball against an Athens defender during the AHSAA 5A State Semifinals match on May 11 in Huntsville. (Reporter Photo/Jon Goering)

HUNTSVILLE — Briarwood Christian School junior forward Savannah Penny had high hopes when the Lions jumped out to an early lead in an Alabama High School  Athletic Association Class 5A semifinal match May 11 against Athens at John Hunt Park.

However, when Athens junior midfielder Grace Morgan netted two goals within a two-minute span late in the first half in a 5-2 win over Briarwood Christian in the semifinal contest, the early momentum evaporated into thin air.

“We just put our heads down and basically gave up,” Penny said. “We were stronger, but they were faster than us.”

Morgan, who led the Golden Eagles with a hat trick in the semifinal contest, impressed Briarwood Christian coach Ryan Leib with her scoring proficiency.

“(Morgan) worked hard and she was pretty crafty,” Leib said. “We got outworked. It isn’t much more complicated than that.”

Penny gave the Lions a 1-0 lead with her unassisted goal in the 16th minute of the match.

Morgan scored her first goal in the 32nd minute off an assist from Athens freshman midfielder Ashley Ward. Morgan found the net again less than two minutes later with an unassisted goal, which gave the Golden Eagles a 2-1 lead at halftime.

Junior forward Juli Owens gave Athens a 3-1 lead early in the second half with her unassisted goal in the 43rd minute of the match. Morgan completed her hat trick with a goal off an assist from sophomore midfielder Riley Ridgeway in the 52nd minute to give the Golden Eagles a 4-1 advantage.

Leib said the Lions weren’t satisfied with the semifinal loss, but he was pleased Briarwood Christian found its way back to Huntsville after missing its annual trip a year ago.

“It was real disappointing for us not to make it last year,” Leib said. “The girls responded well this season.”

FROM STAFF REPORTS The University of Montevallo baseball team ended its 2012 season with a 7-5 loss to the University... read more