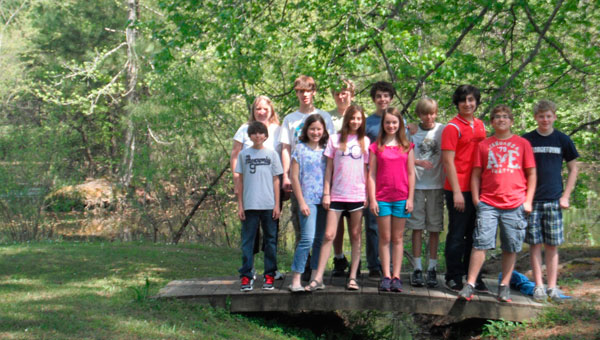 Chris Gallas' life sciences class has been working to improve the ecosystem of a pond on the school's campus. (Contributed)

NORTH SHELBY — With some hard work, Chris Gallas’ life sciences class at the Joseph S. Bruno Montessori Academy managed to preserve the future of a campus pond and gain national recognition along the way.

Davis Tyler-Dudley, 12, said the class removed some of the algae and introduced fish to the pond, which helped build the pond’s natural ecosystem.

The class also built bat boxes, as bats naturally feed on mosquitoes. Between 50-100 bats are now part of the pond’s ecosystem, Tyler-Dudley said.

“Now that we’ve done that, we’re seeing a lot more animals come in,” said Tyler-Dudley, who mentioned dragonflies, turtles and a great blue heron as other animals living around the pond.

“I think we’ve all really learned how to work together in a team,” Tyler-Dudley said.

Ronnie Festok, 13, said after the class began working on the project, class members realized it matched up well with the parameters of the Middle School Disney Planet Challenge, which is designed to teach kids about science and conservation while helping kids make a positive impact on the planet.

“It tied in with what we were learning about,” he said.

After students put together a digital presentation and submitted it for the contest, they found out they won first place in Alabama and made it to the final round of competition for the national grand prize.

However, while the class enjoyed getting national recognition, the most important goal is to ensure the stability of the pond’s fragile ecosystem.

Members of the class have taken it upon themselves to teach the rest of the school about the importance of keeping the pond in good shape.

“It kind of went beyond the curriculum and kind of became a school-wide responsibility,” Festok said.

Sami Refai, 13, said he knows the pond is still a work in progress.

“The pond that we have right now still needs to be worked on and protected,” he said.

Gallas said the school plans to build a dam to help improve the pond’s water levels.