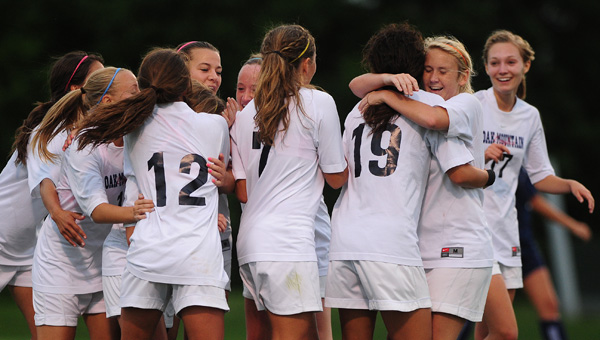 HUNTSVILLE — The stress mounted with every minute ticking off the clock for Oak Mountain High School senior forward Vicki Hill and her teammates in an Alabama High School Athletic Association Class 6A semifinal contest May 11 against Huntsville at John Hunt Park.

Relief came instantly in the 58th minute of the match when Hill drilled a shot past Huntsville goalkeeper Rachel Ames to lift the Eagles to a 1-0 victory in the semifinal match, which clinched Oak Mountain’s first trip to the Class 6A championship match since 2006. The Eagles are searching for their first Class 6A championship in school history.

“It was just completely exhilarating,” said Hill, who rushed to midfield to celebrate the game-winning goal with her teammates.

On the sideline, Oak Mountain coach Pete Dakis had a similar experience.

“I went down on my knee,” Dakis said. “It was exhalting.”

The Eagles held off a couple of late scoring chances down the stretch, including a free kick by Ames that ended up safely in the arms of Oak Mountain goalkeeper Jill Hester with just under three minutes remaining.

Hester recorded four saves as the Eagles posted their 21st shutout of the season.

Dakis knew the Eagles’ opportunities would be few and far between. He credited Hill for taking advantage of a ball deep in the Huntsville zone in the second half.

“They gave us a couple of opportunities,” Dakis said. “We capitalized on one of them.”

Senior forward Bailee Harnett said the Eagles enter the championship match with plenty of motivation after suffering a disappointing end to previous seasons.

“We know what it feels like to not make it here,” Harnett said. “That’s what fuels us.”

Oak Mountain won its fourth consecutive playoff match without junior forward Toni Payne, who helped the U.S. Under-17 Women’s National Team qualify for the 2012 FIFA World Cup following a 7-0 victory over Panama in the CONCACAF Women’s Championship tournament the same day the Eagles clinched a berth in the Class 6A title match. Payne scored a goal in the ninth minute in the National Team’s win over Panama.

The Eagles are without Payne, but not her father, Oyeleke, who has vocally supported Oak Mountain in each match throughout the postseason. Oyeleke, who trains with the Eagles, said he takes pride in seeing the players rally together in his daughter’s absence.

Hornets back in championship match

Chelsea players Anna Pifer and Britne Holderby embrace after a goal by Pifer in the second half of the AHSAA... read more