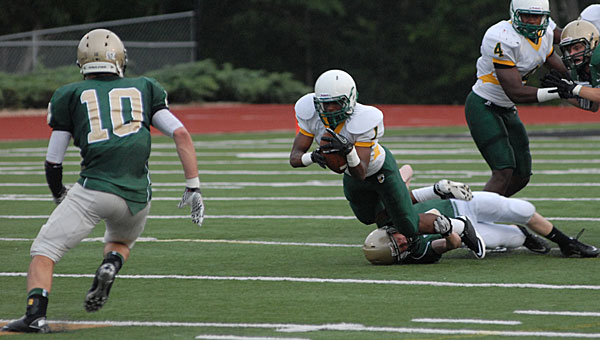 “There are no starters yet. Every position is still wide open,” Burnett told his team after the scrimmage. “It’s going to be about working our tails off this summer.”

The Wolverines rode the arm of quarterback and Division I prospect Jeremy Johnson to a 46-30 victory over Pelham at Ned Bearden Stadium, but Burnett said the game provided “a lot of positive things” for the Panthers to take into summer practice.

“When you play a good team like that, it exposes some things we need to work on,” Burnett said. “I think we will be a much-improved team in the fall.”

Burnett said the 2012 roster will give Pelham more weapons on both sides of the ball and depth at key positions. The scrimmage gave the PHS coaching staff an opportunity to rotate players at nearly every position ­– including quarterbacks Tanner Adams, Hunter Stovall and Devon Mines.

The Panthers finished the scrimmage with 369 total yards on offence – 302 of which were rushing. Senior Eli Beall led the Pelham rushing attack, recording 80 yards on 20 carries, and sophomore Tyler White finished a close second with 74 yards on 13 carries.

Pelham’s first points of the game came with 5:41 left in the first quarter when senior placekicker John Perko connected on a 47-yard field goal, bringing the game to 7-3 in the Wolverines’ favor.

After Carver Montgomery built a 27-3 lead late in the third quarter, Pelham lit up the scoreboard on a 2-yard run by sophomore Morgan Sharp and a successful PAT by Perko. Following another Carver touchdown, Pelham scored again on a 5-yard run by White and a Perko PAT.

With 2:25 left in the game, Pelham brought the score to 40-24 on an 8-yard run by Mines and Perko’s extra point. After another Wolverine touchdown, Mines ran into the endzone from 14 yards out on the last play of the game, bringing the score to 46-30.