Bulldogs fall to Trinity in semifinals 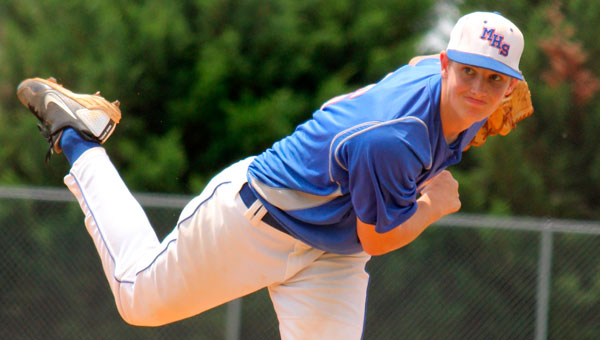 Montevallo High School pitcher Trevor Chatham delivers a pitch to the plate in the Bulldogs' loss to Trinity Presbyterian in a game in the Alabama High School Athletic Association Class 3A playoffs May 11. (Contributed/Amy Pintaro)

The Bulldogs were denied a chance to play for the first baseball championship in school history, but making it to the Class 3A semifinals for the first time is a source of pride for Simpson and his players.

“It all came together for us at the right time,” Simpson said. “All year the guys did an outstanding job.”

The Bulldogs dropped the opening game 6-2.

Zach Smith led Montevallo at the plate as he finished 1-for-3 at the plate with a double. Smith drove in one run.

Chase Hamrick and Zack Sweat each finished 1-for-3 at the plate and scored one run each.

Trevor Chatham took the loss after giving up six earned runs on five hits with three strikeouts and two walks in four innings.

Montevallo fell to Trinity Presbyterian 2-0 in the nightcap.

David Shirah led the Bulldogs offensively as he finished 2-for-3 at the plate. Eric Smith added a double and scored two runs.

Chase Hamrick took the loss after giving up two earned runs on four hits on one strikeout and two walks in a complete game.

Montevallo pitchers shined despite the pair of playoff losses to Trinity Presbyterian.

“All year they put us in position to win games,” Simpson said.

In addition to the Bulldogs’ success on the field, Simpson also took pride in the fact that five of his seven seniors have accepted academic scholarships.

“We’re just as proud of that as we are anything on the field,” Simpson said.

Simpson said he hopes his players will look back at their run to the Class 3A semifinals with pride following their playing careers.

“It’s a great accomplishment,” Simpson said. “We couldn’t be happier for the kids.”

Jaguars split with Oxford in doubleheader