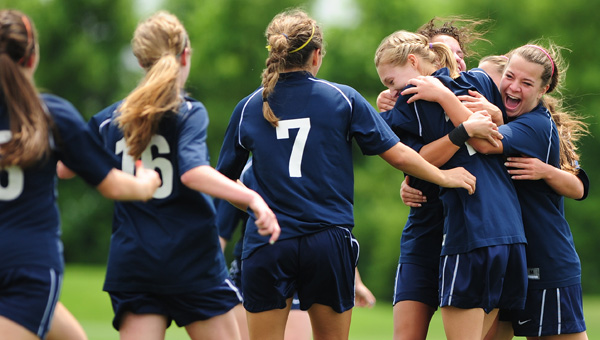 Despite the Eagles’ success in the regular season and playoffs, injuries and adversity always kept Oak Mountain from reaching the pinnacle in the sport with an Alabama High School Athletic Association Class 6A championship.

Oak Mountain can finally dust off a place in its trophy case for a girls’ championship memento next to its four boys’ soccer titles following a 1-0 win over Auburn in the Class 6A championship match May 12 at John Hunt Park.

Following a 1-0 win over Huntsville in the semifinals, scoring opportunities were again limited in the championship match.

Shortly after Harnett just missed the go-ahead goal with her clean shot bouncing off the top post, fellow senior forward Vicki Hill took advantage of a foul in the penalty box and netted a penalty kick past the outstretched arms of Auburn goalkeeper Rebecca Wynne in the 66th minute of the contest.

The free kick stood as the game-winning goal in the match and earned Hill the Class 6A championship match’s most valuable player honors. Hill said she wasn’t nervous when she placed the ball for the penalty kick.

“I’ve done a million penalty kicks,” Hill said. “I knew what to do.”

Oak Mountain senior goalkeeper Jill Hester, rarely tested in the match, finished with one save in the victory.

The victory allowed the Eagles to finish the season with a 10-match winning streak.

Following back-to-back losses Mountain Brook and Spain Park in early April, which snapped an 18-match winning streak, the Eagles’ season could have derailed said Oak Mountain coach Pete Dakis. However, Dakis said his players made a pledge to quickly put the losses behind them and keep their focus on the big picture.

“These girls were determined from the beginning of the year to go all the way,” Dakis said. “After the losses, they got together and said, ‘We’re starting a new season. Let’s do it.'”

Dakis said the Eagles couldn’t have a better group of players representing the first girls’ team to claim a state championship.

“It’s a stellar group of girls,” Dakis said. “They do all the right things on and off the field.”