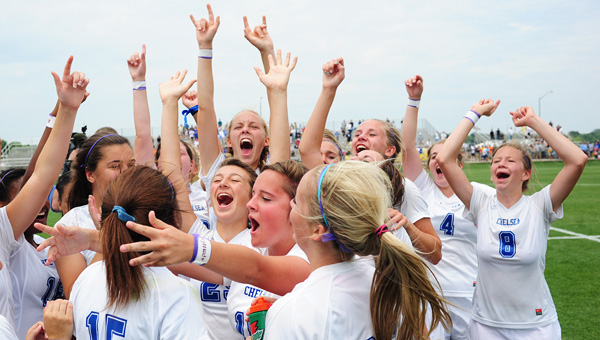 HUNTSVILLE — Chelsea High School sophomore midfielder Britne Holderby had chance after chance to break a tie with Athens in the final minutes of the Alabama High School Athletic Association Class 6A championship match May 12 at John Hunt Park.

Holderby kept digging her head into her shirt each time her shot missed its mark.

A different reaction followed Holderby’s final shot on goal in the Hornets’ second-consecutive Class 5A title match appearance, which clinched her school’s first state championship in any team sport. Holderby darted to midfield with arms raised high in the air to celebrate her goal from the left corner of the penalty box with 3:06 remaining in the Hornets’ 3-2 win over Athens in the title match.

“When that ball went into the net,” Holderby said, “it was just a great feeling. I’m honored to be the one to finish the game and bring the big trophy home.”

Chelsea coach Jonathan Hammett could see the progression in the Hornets’ girls’ soccer program. Hammett knew his team was inching toward its first state championship after returning to the Class 5A title match for the second year in a row, but the Hornets’ leader was still overcome with shock following the final horn.

Hammett said his players have had their eyes focused on the 2012 Class 5A championship match ever since a loss to Spanish Fort in the title match a year ago.

“That’s all the girls were thinking about,” Hammett said.

The match started precariously for the Hornets (22-2-4) when a mistake by the defense resulted in an own goal just more than two minutes into the match, which gave Athens an early 1-0 lead.

Senior midfielder Alli Cochran, who was named the Class 5A championship match’s most valuable player, netted the equalizer in the 14th minute with her unassisted goal.

The match headed into the break at halftime in a 1-1 tie.

Anna Pifer of Chelsea pocketed a goal in the 58th minute off assists by Holderby and senior midfielder Mara Roberts, which gave Chelsea 2-1 lead before a goal by Athens junior midfielder Grace Morgan tied the match in the 61st minute of the contest.

Holderby’s successful shot on goal from nearly 30 yards out in the 77th minute clinched the Hornets’ first state championship.

“To be on the team that made history is an honor,” Holderby said.

Cochran earned the MVP honors due to her play in the midfield, which played a key role in offensive attacks for the Hornets.

“That’s a huge deal,” Cochran said. “We have so many great players. It’s a big honor.”

Hammett said the players deserved all of the credit for brining home the school’s first state title.

“I’ve been fortunate,” Hammett said. “It’s one of those deals of just being in the right place at the right time.”

Bulldogs fall to Trinity in semifinals

Montevallo High School pitcher Trevor Chatham delivers a pitch to the plate in the Bulldogs' loss to Trinity Presbyterian in... read more