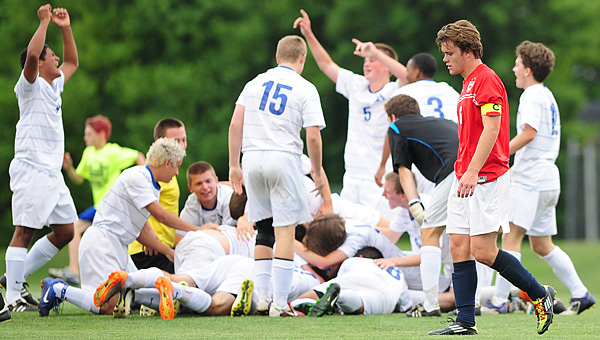 Following a brutal battle of endurance the previous night against rival Vestavia Hills, the Eagles had a quick turnaround against a team entering the championship match with only one loss.

Oak Mountain, down five starters due to several factors, couldn’t overcome a last-minute goal by Auburn in 1-0 loss to in the Class 6A title match. The Eagles were also playing without forward Chandler Stroupe, who missed the game after being issued a pair of yellow cards resulting in a soft red card in the semifinal match against Vestavia Hills.

“You could tell the boys looked like they were running in mud,” Patridge said.

Tim Harbison of Auburn netted the game-winner with just 3:15 remaining in the match. Harbison fired a shot from deep in the left corner of the field, which eventually found the upper right portion of the net just over the outstretched arms of Oak Mountain senior goalkeeper Brad Louis.

Louis finished with three saves in the match.

Patridge credited the Eagles’ seniors for helping Oak Mountain return to the Class 6A title match. Senior captain Christian Adkins accepted the Class 6A runner-up trophy on behalf of his team following the match.

In the end, Patridge said, the Eagles ran into a more talented team in Auburn.

“I’m proud of them,” Patridge said. They battled. (Auburn) is a worthy state champion.”