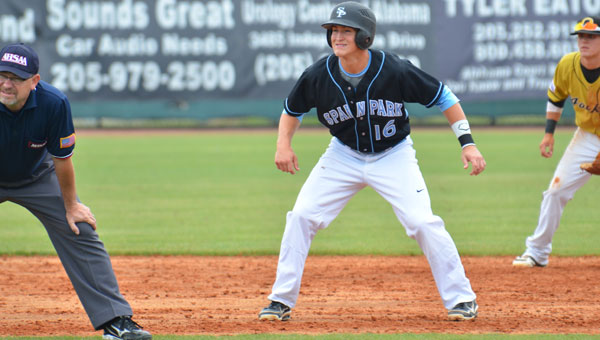 Spain Park High School senior Paul Angel follows a pitch to the plate in the Jaguars' 4-1 loss to Oxford in the deciding third game of an Alabama High School Athletic Association Class 6A best-of-three semifinal series May 12. (Contributed)

The Spain Park High School baseball team ended its record-setting season one win shy of reaching the Alabama High School Athletic Association Class 6A championship series following a 4-1 loss to Oxford in the deciding third game of a semifinal series May 12.

The Jaguars reached the Class 6A semifinals for the first time in school history. Spain Park also capped an unprecedented three-year run with 103 victories.

“It’s always tough win you don’t win it all,” Smith said, “but the good outweighs the bad. It’s a tribute to where we are as a program.”

Grant Veteto led the Jaguars offensively as he finished 1-for-3 at the plate and drove in one run.

Colton Freeman finished 1-for-2 at the plate and added a stolen base. Mikey White, Josh Close and Will McDonald each went 1-for-3 at the plate.

White, who shined in a complete-game victory a week ago in the Jaguars win over Pelham to clinch a berth in the semifinal series, allowed four runs on six hits and recorded three strikeouts in another complete game.