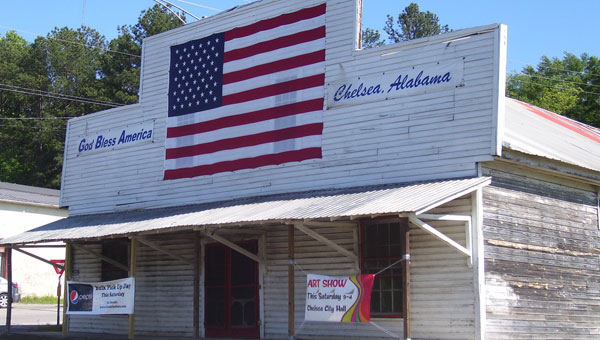 Historic Weldon Store in Chelsea has been photographed, sketched and painted many times through the years. Now it is pictured in an encyclopedia. The corner of Frank Chesser’s old store can be seen in the background, across Alabama 39. (Contributed)

I wonder how many people know that Chelsea is in the encyclopedia.

A great article on the city with pictures of City Hall and historic Weldon Store is in the Encyclopedia of Alabama (EOA), a free, online reference resource on Alabama. Sponsors of EOA would like to include entries on every city in Alabama, but are having a difficult time finding substantial histories of many cities.

I first heard of EOA when Editor James P. “Pat” Kaetz emailed me saying someone at City Hall told him I might be able to direct him to information on Chelsea’s history.

I sent him a little information and a copy of my book on the early history of the Chelsea area, which turned up fun information for both of us.

“Fun thing I found out about my grandfather Chesser from your book,” he wrote me. “(He actually was my step-grandfather, and my mother’s father died before she was even born, so he was the only father she ever knew). Anyway, he was the brother of Frank Chesser, married to Dovie Crane, so the fellow who began Lloyd’s Restaurant was my grandfather’s nephew. Who knew? My grandfather’s name was Adolphus Ponty Chesser.”

Since Dovie Crane was the wife of Frank Chesser, she would be Pat Kaetz’s step-grandmother, right? And she was the niece of Ken’s grandmother Madie Crane Nivens. John William Crane, Madie’s brother, was Dovie’s father.

So this would make John Franklin Crane — the father of John William Crane and Madie Crane Nivens — a mutual grandfather (of sorts) of both Mr. Pat Kaetz and my husband Ken.

Besides a brief history on each town in EOA, entries include things like population and economic information from the latest census, education, government, politics and sports/recreation.