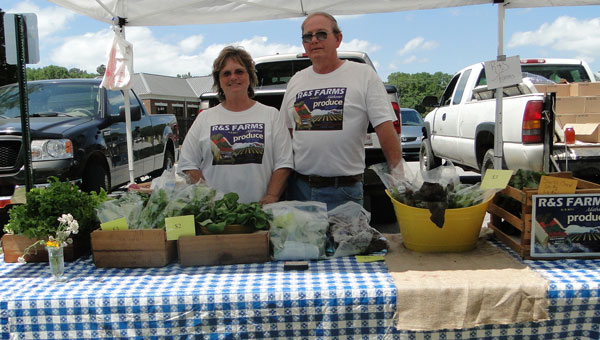 Robert and Sandra Armstrong, owners of R&S Farms in Columbiana, brought a unique produce to the market-hydroponic grown vegetables.

Hydroponics is a method of growing plants using mineral nutrient solution in water without soil.

“There are several benefits of hydroponic gardening,” Sandra said. “There’s no weeds, bugs or pesticides. It’s easier to take care of, it grows faster and it’s healthier for you.”

The newly formed Calera Civitan group gave out water, information about the organization and offered face painting or a temporary tattoo. Dee Hutsler, a Civitan volunteer, said the volunteers must have painted “a million little faces.”

“We enjoyed meeting folks and introducing ourselves to the community,” Hutsler said. “Civitan is a service group who supports the community and we focus on helping those with developmental disabilities.

“The festival was lots of fun, and we hope it was a little better for our contribution,” he added.

Coordinator Rebecca Krueger said it’s only through the hard work of the market committee and city employees that the day was successful.

“Many people worked tirelessly through the week, during and after the festival. We thank our sponsors of this year’s Kids Zone — Central State Bank and Sav Mor Food Outlet — as well as the UPS Store and Davis Machinery for their sponsorship. We are grateful for the strong support we receive from Mayor Jon Graham.”