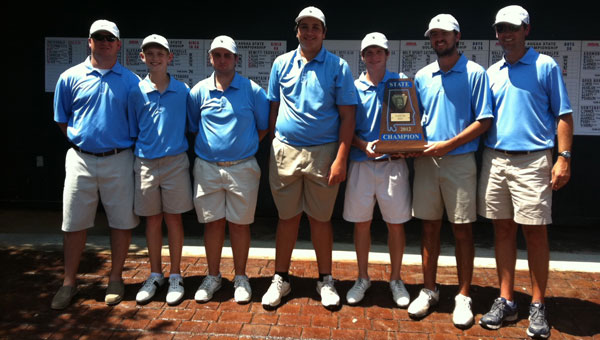 The Spain Park High School boys’ golf team captured its fourth Alabama High School Athletic Association Class 6A championship in five years May 15 after collectively carding a 3-over par 579 in the two-day tournament at the Robert Trent Jones’ Grand National course in Auburn.

The Jaguars, who collectively shot a 5-over par 293 in the final round, edged rival Hoover by five strokes to claim their fourth title in school history following championships in 2008, 2009 and 2010.

“We knew we were going to get everybody’s best effort,” Moody said.

Robby Prater, who claimed the Class 6A individual title in 2009, led the Jaguars with his 2-under par 142, which placed him third in individual standings. Prater led the field of 36 golfers entering the final round before Will Cannon of Hoover and Alex Green of Fairhope climbed their way to a two-way tie atop the leader board with a 4-under par 140.

Moody praised Prater, who has been a part of three of the school’s state championship teams, for his consistent play throughout his career.

“(Prater) has been a big-time contributor,” Moody said. “He’s been a great asset for our team.”

Daniel Schroder of Spain Park finished in a two-way tie for 14th overall after posting a 7-over par 151. Patrick Martin of Spain Park, who shot a 2-under par 70 in the opening round, was disqualified from the tournament in the second round.