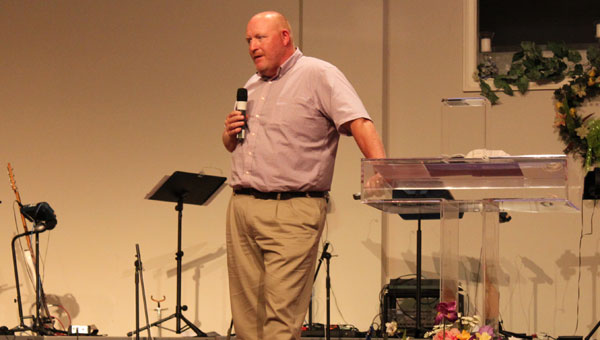 Lonnie Layton educates parents and community members about the effects of drugs and alcohol on adolescents at Concord Baptist Church in Calera. (Reporter photo/Christine Boatwright)

CALERA – Parents and community members alike learned about the effects of drugs and alcohol and the symptoms displayed by adolescents under their influence.

Lonnie Layton, a community representative for Bradford Health Services, said he was “off the clock” as he represented the Shelby County Drug Free Coalition to bring drug- and alcohol-related information to attendees.

“That I know of, 14 kids died in the last two years with drug- and alcohol-related issues. We’ve had three since spring break,” Layton said. “I do what I do because I feel God is calling me to make a difference in people’s lives.”

During a forum held at Concord Baptist Church in Calera May 16, Layton said the number-one gateway drug is tobacco.

The two most commonly used substances are alcohol and marijuana, and adolescents are beginning to smoke marijuana a lot earlier than past generations, Layton said.