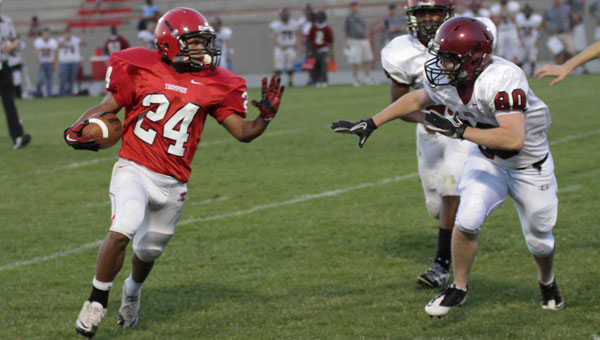 Thompson High School sophomore running back Xavier Johnson breaks free for a 24-yard touchdown in the fourth quarter of the Warriors' spring game May 17 against Sylacauga. (Contributed/Eric Starling)

ALABASTER — Thompson High School football coach Michael Montgomery may have a ton of seniors on his roster, but the former assistant turned head coach knows there’s a difference between age and experience.

The disparity was evident in the Warriors’ spring game May 17 as Thompson fell to Sylacauga 26-7 at Larry Simmons Stadium.

Sophomore running back Xavier Johnson broke free on the edge and raced down the sideline for a 24-yard touchdown run with 8:19 remaining in the game. Sophomore kicker David Buckalew added the extra point.

The late score came after Sylacauga reeled off 26 unanswered points, but Montgomery said the offensive highlight proved the Warriors have potential.

“We showed sparks of great things to come,” Montgomery said.

Sylacauga scored its first touchdown early in the first quarter after recovering a fumble by Thompson senior quarterback Trey Matherson and returning it for a touchdown. The Aggies added another touchdown minutes later on a 85-yard touchdown run.

The Warriors threatened to put their first points on the scoreboard midway through the second quarter, but Matherson’s 29-yard pass to senior Eric Reeves on fourth down was ruled out of bounds in the corner of the end zone.

Thompson again drove the ball deep into Sylacauga territory before Matherson had a pass picked off at the goal line in the final minute of the first half. Senior defensive back Austin Bates, who recovered a fumble earlier in the second quarter, picked off a pass to give Thompson one final shot at the end zone. However, Matherson was sacked on the final play to run out the clock.

The Aggies added two passing touchdowns in the third quarter to push their lead to 26-0 before sophomore quarterback Zach Brammer entered the game and led Thompson on its only scoring drive.

Montgomery said the Warriors are a work in progress, but the spring game will help the inexperienced players learn what they need to work on over the summer.