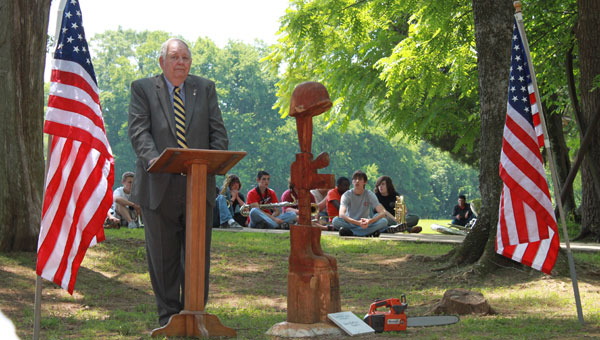 Rotarian Charles Turner said it was an honor to speak for veterans at the dedication of the soldier's cross in Orr Park May 17. (Reporter photo/Chrisitne Boatwright)

MONTEVALLO – Montevallo’s Orr Park now has a tribute to the fallen military heroes of Montevallo.

The Montevallo Rotary Club held a dedication ceremony for the wooden soldier’s cross in the park May 17.

Club President Terry Sutton said the fallen soldier battle cross dates back to the Civil War. When a soldier is killed on the battlefield, the cross is made of the soldier’s rifle with bayonet in the round, helmet on top, dog tags hanging from the rifle and the boots of the soldier next to the gun.

“It’s purpose is to show honor and respect for the fallen at the battle site,” Sutton said.

President-Elect Phil Hurst commissioned artist Andy Cummings to create the cross, which he fashioned with his chainsaw.

Hurst said a full-sized version will be on display at Montevallo Elementary School, but the wooden version in Orr Park is just from the Rotary Club.

“It’s to all fallen heroes,” Hurst said. “There are no names.”

Mayor Ben McCrory, a longtime Rotarian, said he was honored to be a part of the dedication.

“As a city, we’re proud to have this permanent structure in Orr Park,” he said.

Rotarian and military veteran Charles Turner said veterans were not honored by society after the Vietnam conflict.

“The results were almost catastrophic in proportion,” he said. “Obviously, we’ve learned some things. As a people, we have learned to honor our fallen and our veterans. As a living veteran, I’m honored by the honor we pay to the fallen.”

Chelsea's Allie Luster tries to get an out at second base during the AHSAA Class 5A State Softball Semifinal game... read more