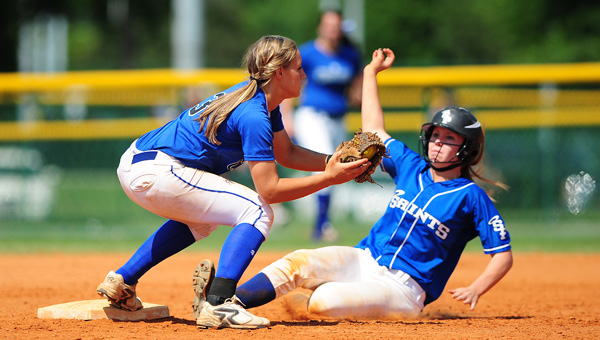 Chelsea's Allie Luster tries to get an out at second base during the AHSAA Class 5A State Softball Semifinal game against Saint Paul's on May 18 in Montgomery. (Reporter Photo/Jon Goering)

After surviving in a grueling one-run victory in extra innings over defending Alabama High School Athletic Association Class 5A champion Mortimer Jordan the night before a semifinal game against St. Paul’s, McCartey expected the Hornets to take the field with a breath of fresh air.

McCartey said the victory over the Blue Devils gave the Hornets an extra boost of energy heading into the game against St. Paul’s. The Hornets proved they have plenty left in the tank after notching a 13-2 victory over the Saints in six innings due to mercy rule, which earned Chelsea its first ever berth in the Class 5A championship game.

“I think (the win over Mortimer Jordan) was the best thing that could have happened to us actually,” McCartey said. “I think that game helped us to persevere. It gave us confidence.”

Chelsea, which is currently in the driver’s seat, will face either Mortimer Jordan, Spanish Fort or St. Paul’s in the championship game at 4 p.m. If the Hornets drop the first game, a rematch is set for 5:30 p.m. with the winner capturing the Class 5A title.

Jordan Gray and Alex Osborn each homered in the Hornets’ victory over St. Paul’s. Gray’s solo homer sparked a four-run inning in the bottom of the third for the Hornets, while Osborn’s two-run blast keyed in the fifth inning gave Chelsea a 8-1 lead. Chelsea added five runs in the top of the sixth inning to close out the victory.

Gray and Osborn drove in two runs each in the win.

Maygen Boaz added a pair of doubles. Erin Jones finished with a double and drove in two runs.

Craft, who earned the win in the circle, finished with seven strikeouts in the complete-game victory.

McCartey said the Hornets reached a team goal set before the season by eclipsing their best season in school history, which came last year when Chelsea finished fourth in the state tournament.

Thompson High School sophomore running back Xavier Johnson breaks free for a 24-yard touchdown in the fourth quarter of the... read more