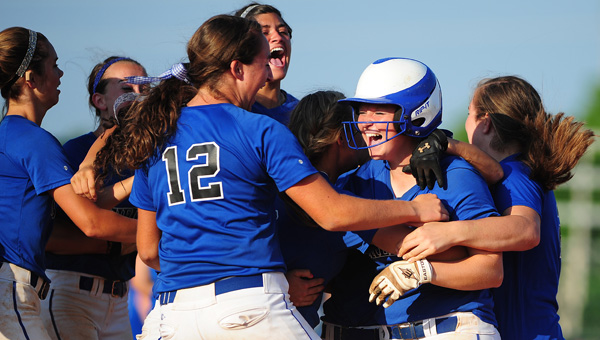 Chelsea's Alex Osborn, right facing, celebrates with her teammates after driving in the game-ending run in the AHSAA 5A State Championship game against Mortimer Jordan on May 18 in Montgomery. (Reporter Photo/Jon Goering)

Chelsea High School had such a commanding lead in the Hornets’ 11-1 win over defending champion Mortimer Jordan, several team members inside the home dugout didn’t realize the moment the team captured its first softball title in school history.

That wasn’t the case for Chelsea senior Allie Luster, who scored the game-ending run in the bottom of the fifth inning to clinch the Hornets’ victory by mercy rule.

“I knew it was over,” said Luster, who celebrated at home plate before being surrounded by teammates once they realized the title had been secured. “I knew we had it.”

The rematch between the two teams played out much different than the first meeting in the Class 5A state tournament, which saw the Hornets escape with a one-run victory in an 11-inning brutal battle of wills.

Senior Kacie Craft, who pitched a combined 11 innings as she led the Hornets to back-to-back victories over St. Paul’s and Mortimer Jordan on the path to the championship, said she would have done whatever it took to help her team capture the title.

“I just had that adrenaline with my teammates behind me,” Craft said. “I could have gone a whole another game if I had to.”

Chelsea jumped out to a 2-0 lead following the bottom of the first inning. Caitlin Bice led off with a walk before scoring on an RBI single by Luster. Luster then came home on a fielder’s choice hit by Erin Jones.

The Blue Devils plated a run in the top of the second inning before Jordan Gray doubled down the left-field line and scored on a RBI single by Jo Jo Johnston to give the Hornets a 3-1 lead in the bottom half of the inning.

Chelsea plated six runs in the bottom of the third inning to push its lead to 9-1. The inning was highlighted with a two-run double by Johnston and a two-run single by Alex Osborn.

Gray led the Hornets with a pair of doubles in the championship game.

Johnston added two hits, including a double. Luster, Osborn, Jones, Craft and Boaz finished with a pair of singles each. Jones drove in a team-high three runs, while Johnston and Bice drove in two runs each. Luster, Osborn and Boaz drove in one run each.

Craft finished with three strikeouts and three walks while giving up just one earned run on two hits in the championship game.

The Hornets captured the state championship just six days after the Chelsea girls’ soccer team won the school’s first title in a team sport. Luster said the team appreciated the support of the girls’ soccer team, which was represented by several team members in Montgomery.

“They were probably our biggest fans,” Luster said.

Chelsea coach Russell McCartey said the Hornets have been close to capturing a state title the past few years, which included a fourth-place finish in the Class 5A state tournament a year ago.

McCartey wasn’t surprised to see his players break through in 2012.

“This team just had a refuse to lose attitude this year,” McCartey said.

Chelsea's Allie Luster tries to get an out at second base during the AHSAA Class 5A State Softball Semifinal game... read more