Scholarship given in student’s memory 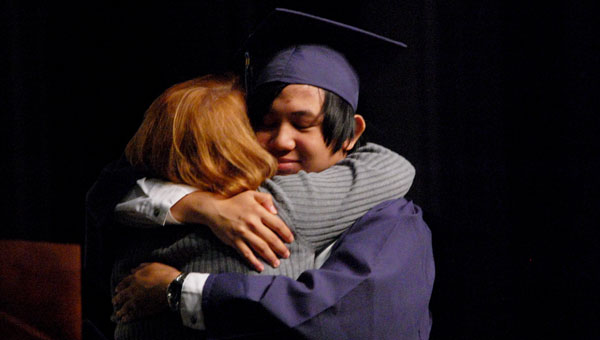 Elaine Walton embraces Calera High School student Tam Ngo after surprising him with a scholarship to the University of Montevallo. (Reporter Photo/Jessica Crihfield)

CALERA – After Calera High School senior Parker Morris passed away in January, her status as an organ donor allowed others to live.

After Walton received a letter from UM asking Morris to confirm her fall attendance, she sent a letter and a photo of Morris to the admissions office explaining the situation.

“We had read in the newspaper about Parker’s loss and her tragedy,” said Greg Embry, director of admissions. “That obviously saddened us because she had been accepted to the university and would have joined the family in the fall.”

Embry is no stranger to loss, as he lost his brother in a car accident last year.

“I’ve seen the effect it’s had on my mom and dad. I’ve a little bit of an understanding of the pain they’re going through,” he said. “We have a scholarship here with my brother’s name, and I know that helped my parents a lot.”

After speaking with Embry, Walton saw a Facebook photo of Ngo holding his UM acceptance letter. She spoke with a guidance counselor, and a surprise was planned for the scholarship presentation time at CHS. Ngo was awarded a freshman leadership scholarship.

“I felt it was a way to honor her memory,” Walton said. “At Parker’s memorial, Tam stood and gave such a testimony to who Parker was.”

Rotarian Charles Turner said it was an honor to speak for veterans at the dedication of the soldier's cross in... read more