Calera carves up Chilton County through air in spring game 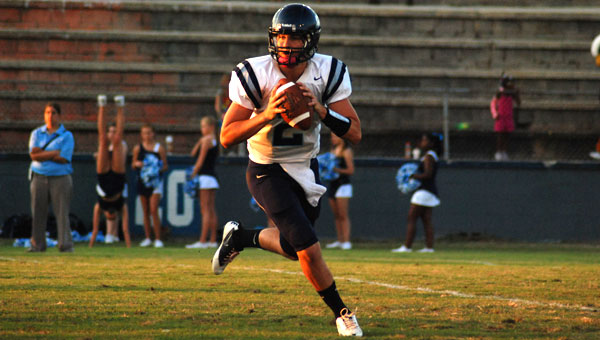 Calera High School quarterback Zack Reneau rolls out for a pass in the Eagles' spring game May 17 against Chilton County. (Contributed)

CALERA – The Calera Eagles varsity football team dominated a much larger Chilton County with its air attack in its annual spring scrimmage May 17.

Eagles head coach Wiley McKeller said that he was impressed by the offensive clinic his varsity squad put on for three quarters.

“I was most impressed with our passing game,” he said. “Our quarterback Zack Reneau played fantastic and showed the leadership skills I expect from our starting quarterback.”

Reneau, a senior, went 16 of 20 for 252 yards and two touchdowns through the air and also added 19 yards on the ground along with another score. Reneau’s main target was Jordan Bishop who snagged six catches for 170 yards and two scores.

“We have a ton of playmakers,” McKeller said. “There are a ton of guys that can get out and spread the field and help make the type of offense I run more effective.”

Defensively, the Eagles only gave up two touchdowns and were a tackling force led by Sheldon Nixon and linebacker Lane Johnson who both combined for fifteen total tackles.

“When we went into this game, we needed a physical test,” McKeller said. “That’s exactly what we got. We’re not really big up front and sometimes we struggle wrapping guys up but it was great to see the effort and intensity on defense.”

The Eagles open up against Chelsea High School on August 23.

By ALDO AMATO / Staff Writer VINCENT – The Vincent Yellow Jackets took on the Childersburg Tigers in their annual... read more