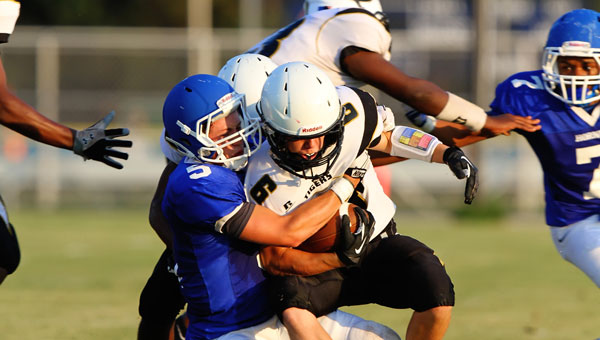 Chelsea High School defensive back Davis Shoemaker brings down a Dadeville running back in the Hornets' spring game May 17. (Contributed/Cari Dean)

CHELSEA – The Chelsea High Hornets put up a magnificent effort but both the varsity and junior varsity squads fell short to the Dadeville High Tigers.

The Hornets, who now will be facing Alabama High School Athletic Association Class 6A competition, took on an impressive Dadeville team during their annual spring exhibition. Despite facing a four-star recruit on the defensive line,  Rod Crayton, the Hornets running game looked fresh in the first half.

Even though his team fell short, head coach Wade Waldrop said he was overall pleased with the team’s effort.

“I thought we did a good job as far as execution went,” he said. “It’s been a tough spring but I was impressed overall with our effort out there.”

One of the standouts of the night was senior running back Julius McCall who by halftime had over 116 yards and a touchdown on the ground. McCall also showed off a canon of an arm on a trick play in which he tossed a 34-yard touchdown which gave the Hornets a 14-13 lead going into the half.

Junior quarterback Trent Hagin showed promise in his first game as the varsity starter. Despite not passing or rushing for any touchdowns, Hagin accounted for 60 total yards on offense in both the air and ground.

Defensively, the Hornets were solid only allowing only a handful of big plays. However, after the junior varsity took the field in the second half, the Hornets could not stop a persistent air attack by Dadeville freshman Cal Jones who tossed two scores to seal a 25-21 victory over the Hornets.

Waldrop said health will be the main focus going into next season.

“Overall I was happy with what I saw,” Waldrop said. “But our goal is to go into June and more importantly into next season healthy.”

World championship wraps up at OMSP