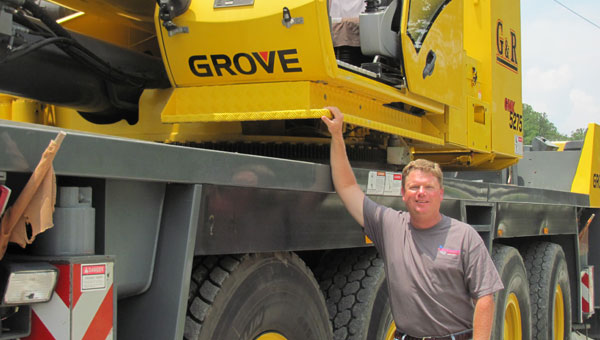 In 1983, Sue and Butch Poskey moved to Alabaster from Winter Park, Fla. with their sons Charlie and Michael. They actually chose Alabaster because the elder Poskey had a friend who had moved here to start a crank shaft business. Poskey decided to try Alabaster too.

American Drilling became available and the Poskeys (with no previous experience in this type business) jumped in with both feet. It takes many hours of study and on-the-job training to get licensed to operate some of their bigger machines. Cranes, trucks, lifts, drill bores all foreign language to me. But for a man 46 (going on 18) who has been at this job since high school, it’s just another regular day.

Drilling blast holes for quarries throughout Alabama is the primary bulk of their work.

The extensive crane division was added later and has grown throughout the years as part of a need in the quarries for plant maintenance.

Poskey met his wife, Kim, at a New Years party and married on May 27, 1995 in Ochoa Rios, Jamaica. They have been blessed with two sons, Taylor, who is 12, and Parker who will be 3 in June.

Poskey has volunteer coached with Alabaster Parks and Recreation, coaching son Taylor’s baseball team. Taylor has also won several motocross awards since he was 4 years old. Poskey’s passion and method of relaxation is building and drag-racing motorcycles. Currently, Poskey races a Suzuki Hayabusa. From Gainesville, Fla. to New Jersey, he follows his dream. All the Poskey men, Charlie, brother, Michael, and dad, Butch, flew to Colorado Springs in 2009 and rode rented Harleys for a seven-day trip through the mountains of Colorado.

“It was breathtaking, no hurry. It’s where I want to take my wife and boys,” Poskey said. “There are underground springs and old towns. Amazing scenery. I have been blessed in my personal and professional life.”

Poskey’s favorite past car? An old Vega out of a junk yard. He was only 16 when he and his dad totally rebuilt it.

Mother, Sue, passed away in 2007 after battling cancer. “She was the glue of our family, and kept us all in line,” he said. “For Kim and I to bring our boys up with family values and morals is foremost in our lives.”

Wife, Kim, a full-time mom, is a UAB graduate in social work.

A country boy at heart, Poskey is down-to-earth like the kid next door, loves Kid Rock, racing motorcycles, coaches ball, runs drills and is a satisfied man.

Wilson speaks up for animals

By SANDRA THAMES / Community Columnist Most of us are familiar with the tireless work of the Shelby County Humane... read more