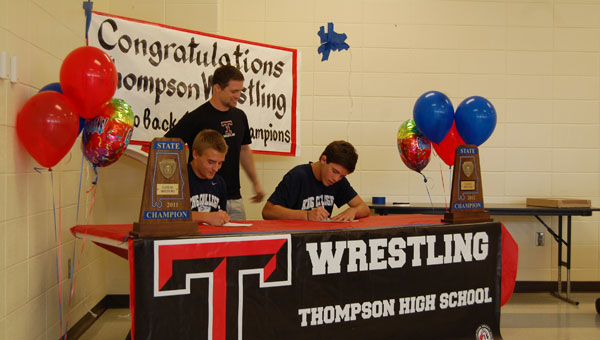 ALABASTER – Thompson seniors J.A. Jones and Jesse Masters both signed on with King College in Tennessee to continue wrestling at a collegiate level, a first for the program.

“It’s really good because they are the first ones the program started with,” head coach Shawn Weltzin said. “They both grew up through the middle school program and it’s great to see them move on and pursue it in college.”

Jesse Masters, who started in the program in the sixth grade, said that he is elated knowing he has a scholarship going into college.

“It feels great because wrestling is not that big in the South,” Masters said. “Not everyone gets a wrestling scholarship so it means a lot for us and the program.”

Jones said that although colligate wrestling is on a different level than what he has experienced, he feels confident in the coaching he’s received from coach Weltzin.

“Coach Weltzin has done a great job preparing us,” he said. “We know it is going to be a new level of competition but we’re already training.”

Both Jones and Masters were part of the Warriors back-to-back state championships in 2010 and 2011 and despite leaving the program, have certainly left a legacy for future teams. Masters said that despite losing the amount of experience, that the program at Thompson will be in good hands next year as they vie for the three-peat.

“You know we’re losing three state champions this year,” Masters said. “But I expect everyone next year to step up and be a leader and this team will be alright and in line for our third championship.”

The King College Tornadoes are a NCAA Division-II school located in Bristol, Tennessee and currently competes in the Conference Carolinas athletic conference.

Thompson High School sophomore running back Xavier Johnson breaks free for a 24-yard touchdown in the fourth quarter of the... read more