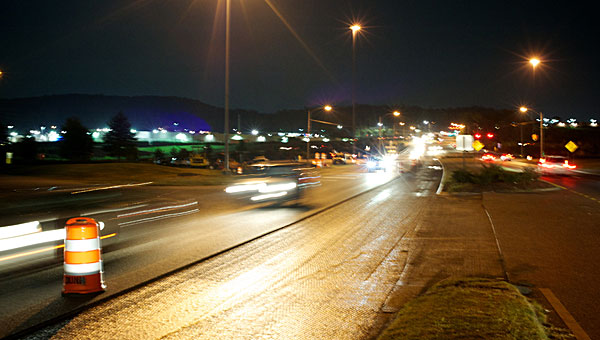 Alabama Department of Transportation crews work to resurface U.S. 31 from Interstate 65 to Shelby County 68 in Alabaster in 2011. Crews recently began repaving from Shelby County 68 to Riverchase Parkway in Hoover. (File)

Alabama Department of Transportation and Dunn Construction crews began repaving work on May 20 on a stretch of U.S. 31 between Shelby County 68 in Alabaster to Riverchase Parkway in Hoover.

The crews began working on the southbound shoulders and turn lanes near Valley Elementary School, and will continue working on the repaving project each night, said ALDOT Engineer Brian Davis. Crews will only work during the evening hours to minimize the impact on traffic, Davis said.

The project is scheduled to be completed by September, but the date could change depending on weather conditions, Davis said.

The Pelham City Council in late January voted unanimously to enter into an agreement with ALDOT to repave and restripe the section of road. In 2011, ALDOT repaved U.S. 31 from the Interstate 65 exit 238 in Alabaster to Shelby County 68.

The repaving project will not include widening any sections of U.S. 31.