COLUMBIANA – A lieutenant with the Shelby County Sheriff’s Office recently showed off his acting skills in the motion picture “42,” which is partly being filmed at Rickwood Field in Birmingham.

Lt. Dennis Blackerby, 49, said he recently was approached by the Atlanta-based CL Casting Agency to play a minor role in the Jackie Robinson biopic “42.”

“They told me to send a head shot and body shot,” Blackerby said. “So I sent those in and a couple hours later they wanted me to go up to a fitting in Birmingham and that’s where I found out I’d be playing a vendor selling peanuts, popcorn and whatnot.” 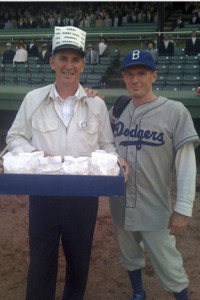 From left, Dennis Blackerby and Toby Huss, an actor in "42."

Blackerby said filming began early, sometimes at 4:30 a.m. at the historic Rickwood Field. But despite the early starts, he was grateful to have landed a small role in a film starring Harrison Ford and Alabama native Lucas Black.

“It was an awesome and loose atmosphere,” he said. “The cast was extremely nice and interactive and the setting was almost surreal.”

Rickwood Field was transformed into the golden era of baseball filled with antique signs, tattered uniforms and spectators dressed in 1940s attire. Blackerby said it didn’t take much to transform the 102-year-old stadium.

“The stadium was full of old advertisements and signs,” Blackerby said. “I had to wear dress pants, dress shoes and a hat that read ‘cigarettes, hot dogs, popcorn.’ It was really amazing.”

Blackerby said he is not much of a baseball fan, but occasionally enjoys watching the game and felt like he was doing just that while on set.

“Even though it was at times quiet and it was all acting, it still felt like it was a real game,” he said. “The atmosphere overall made the experience all the more better.”

With his first major motion picture in the books, Blackerby said he is open to exploring further acting gigs. After all, the Navy veteran has done quite a bit with his life up to this point. Whether it was earning his commercial pilot’s license or serving on the Wilsonville Town Council, Blackerby said he hopes to remain active and trying new things.

“I’m not a person that is happy doing just one thing,” he said. “So maybe I will look for more opportunities in the future.”

Wilsonville woman injured after being dragged behind vehicle

FROM STAFF REPORTS WILSONVILLE – Sheriff’s investigators are looking for a Wilsonville man allegedly responsible for dragging a woman behind... read more