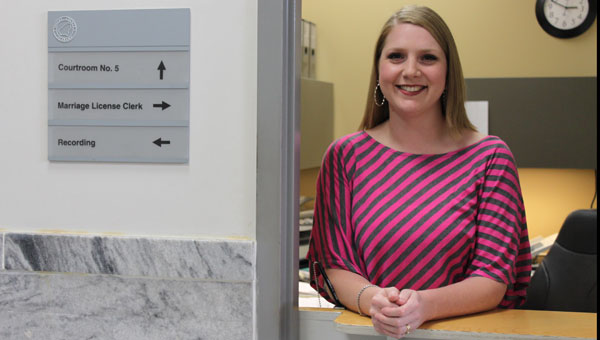 Melody Winslett has worked in the Marriage License Division of the Shelby County Probate Office for the past 10 years. (Reporter photo/Christine Boatwright)

COLUMBIANA – Melody Winslett may be one of the busiest women in the county during wedding season.

Winslett has worked with engaged couples to give them marriage licenses for the past 10 years.

Winslett began working for the county when she was 19 years old. She was a receptionist for three years before moving to the probate office and working in the land records division.

“They needed help with marriage licenses because it was June, and then they kept me on,” she said.

An influx of minors seeking marriage licenses comes during the summer months, as students are out of school. When she started in the marriage license office, the minimum of age of minors with parental consent was 14, but the law has since raised the age to 16.

“We see all kinds of weddings,” she said. “We do the weddings in the gazebo. We have used the courtroom on occasion, but usually it’s in service.”

Winslett said some of the sweetest stories arise from the older generation.

“When older people come in, they’re sometimes reunited high school sweethearts. I hear that a lot,” she said. “They were sweethearts in high school, and then moved on. Now their spouses have passed on, and they’re reunited. They’re really sweet stories.”

Winslett also enjoys seeing grooms who are excited about getting married.

“I had a groom in here last week who waited nine years to marry her. He was bubbly and happy,” she said. “That’s cute when the grooms are excited about it.”

Winslett said Valentine’s Day used to be one of the busiest days, with 10 to 15 marriages on that day, but it has dropped off over the years.

“People tell me I have a happy job, and, for the most part, it is,” Winslett said. “Holidays are busy. Any holiday, it doesn’t matter.

“Believe it or not, Halloweens have gotten busier,” she added with a laugh. “I’ve never had one dress up, but before I started here, they said there was a Pebbles and Bambam.”

The call to minister to law enforcement