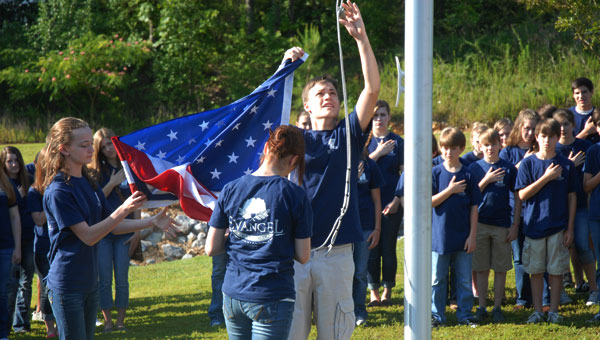 Evangel Classical Christian School students, from left, Abbie Collins, Haley Woodman and Alex Herndon work during a May 23 ceremony to raise the American flag for the first time on the school's new flagpole. (Reporter Photo/Neal Wagner)

Every student at Alabaster’s Evangel Classical Christian School stood at attention with their hands over their hearts on May 23 as the school raised the Stars and Stripes for the first time.

For the past year, school officials have been working to bring a new flagpole to the lawn in front of ECCS using money donated to the school by the class of 2011. Last year’s seniors performed the play “The Importance of Being Earnest” and raised about $1,700 to fund the flagpole’s purchase and installation.

At the play, which the seniors organized in a week, students sold tickets and secured sponsorships for tea tables at the performance.

“This is a joyous occasion for all our kids,” said ECCS Logic and Rhetoric School Principal Melissa Bell, noting several 2011 alumni came back to the school for the flag-raising ceremony.

The new flagpole features a solar-powered light, and will fill a void the school has been working to fill for years, Bell said.

“Our students always do See You at the Pole every year, and they would have to all gather around someone holding a little flag,” Bell said with a laugh.

The seniors’ donation continued a history of students giving back to the school and staying involved after graduation, Bell said.

“Our alumni come back to see us all the time,” Bell said. “They still love their school.”

The PHS Class of 2012 graduates toss their hats in the air during the graduation ceremony May 22 at the... read more