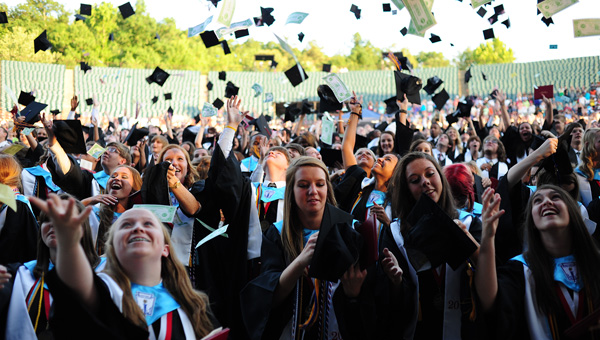 Members of the Thompson High School Class of 2012 toss their hats into the air during the commencement ceremony on May 23 at the Oak Mountain Ampitheater. (Reporter Photo/Jon Goering)

Thompson High School valedictorian Hannah Mehlhoff said less than a month ago, she couldn’t wait to walk across the stage to receive her diploma.

“Today, I almost wish I had a few more days to say goodbye,” Mehlhoff said in her speech during the THS graduation ceremony May 23 at the Oak Mountain Amphitheatre. “We will keep Thompson as a treasured memory.”

Nearly 400 seniors dressed in black caps and gowns took the next step in their lives as they celebrated their final day as THS students in front of thousands of friends and family members.

During her speech, Mehlhoff praised the school’s faculty, administrators and her classmates for helping her create lasting high school memories. 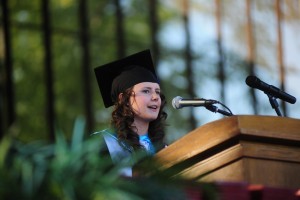 Thompson High School Valedictorian Hannah Mehlhoff delivers her speech during the May 23 commencement at the Oak Mountain Ampitheatre in Pelham. (Reporter Photo/Jon Goering)

“I’ve got to thank our principals. Really, it’s the dedication of the administrators that ensures the quality of education we have,” Mehlhoff said. “We need to thank the teachers who taught us how to give of ourselves. This is one of the most valuable lessons you can learn.

“I couldn’t have had such a wonderful high school experience without each and every one of you guys,” Mehlhoff told her classmates.

Mehlhoff also thanked the parents in the audience for helping the class of 2012 reach graduation.

“We are here because of you,” she said to the parents.

Class of 2012 President Domenick Simonetti praised his classmates for their giving spirit, and said members of the class helped raise money to build a new house for 2011 THS graduate Josh Carden, helped pay hospital bills for THS student Branden Belser after he was involved in a car crash and traveled to Tuscaloosa to help in the wake of the April 2011 tornadoes.

“Giving is something this class has done very well,” Simonetti said. “Life is meaningless unless we are living for something.

“I think this class has at least some idea about what we are living for,” he said.