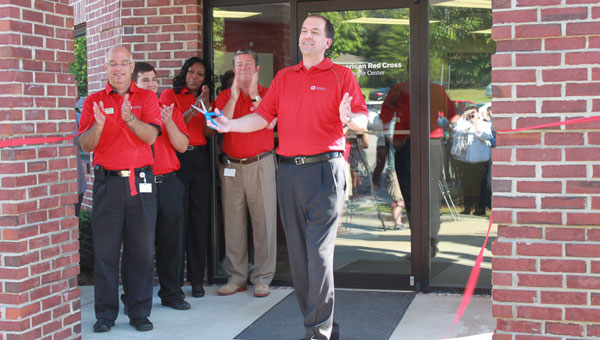 INDIAN SPRINGS – As Mark Beddingfield cut through the improvised ribbon made out of coban wrap, he welcomed all to tour the new headquarters of Alabama and Central Gulf Coast American Red Cross Blood Services in Indian Springs.

Beddingfield, the chief executive officer of the region, said the former headquarters was in downtown Birmingham, in Southside.

“We did a marketing study, and most of our donors are within a certain mileage of this area,” he said of Indian Springs.

Beddingfield said he hopes the new headquarters, located off Caldwell Trace, will be a place in the community for people to gather. The American Red Cross was renting the former headquarters building, but was able to purchase the Indian Springs location. The building offers community conference rooms for public use. 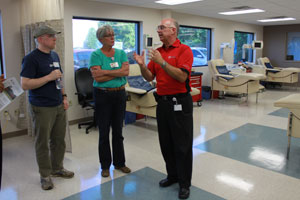 “We’re mimicking the move of folks from the city to the suburbs,” said Communications Program Manager Evan Duffy.

The grand opening offered a “Taste of Indian Springs,” and food from Brava’s, Shane’s Rib Shack, Bruster’s and Winn Dixie was located through different points of interest on the tour of the headquarters.

The headquarters was in use in March, but the official ribbon cutting on May 23 was a way to “throw back the curtains,” Duffy said.

“People typically see the donor center, but see none of the operation,” he said.

In addition to a donor center, the building also houses a hospital service department, therapeutic services and a reference lab, which assists hospitals in locating donors with rare blood types.

“The need is really great right now,” he said.

FROM STAFF REPORTS The Wilsonville man who allegedly dragged a woman behind a vehicle on May 20 now faces additional... read more