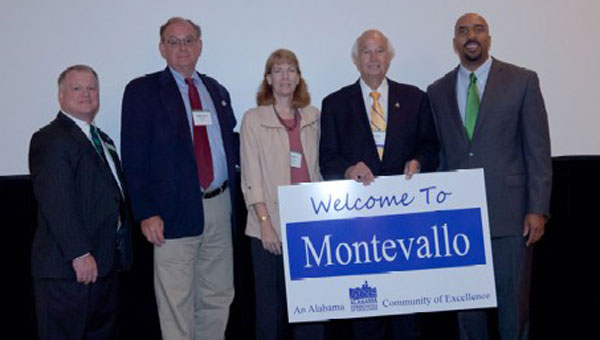 MONTEVALLO – The City of Montevallo was recently selected as an Alabama Community of Excellence.

The ACE program assists cities with populations between 2,000 and 18,000 with economic and community development.

“We’re excited because they have resources available that cities our size typically can’t afford or don’t have available in house. That gave us assistance with our strategic planning and other things we’re doing,” said ACE Local Coordinator and City Clerk Herman Lehman.

“It gave us a chance to review things independently, and we were ahead of the curve, since we’ve already gone through our comprehensive planning program,” he added. “That was kind of exciting we’d already done those things independently on our own.”

The city was recognized on May 21 during the general session of the Alabama League of Municipalities annual convention in Birmingham.

“It’s a lengthy application. You have to prove what you’re doing in certain areas,” Lehman said. “They only have so many resources available to them. The interesting thing is we were picked at the time the economy took a nosedive.”

Six other Alabama communities were chosen, including Arab, Childersburg, Eufaula, Foley, Hartselle and Livingston. Montevallo is the first Shelby County community to be selected for the program.

Lehman said the ACE program will assist the city in securing a $5,000 grant for planning costs and architect fees for the downtown revitalization project.

“More than anything, I think it’s recognition that you’re doing the right things and your community is on the right track,” Lehman said. “It’s something we have to maintain over time. Every three years, we have to be recertified, so we have to prove to them we didn’t just sit still. We have to work the plans they helped us to develop and keep things moving forward.

“For us, it’s not going to be difficult. Our downtown revitalization project and the things we’re doing with our recycling, the Vallocycle program, and we’re about to finish our rezoning. All those things factor in and show that we’re not sitting still. We’re moving forward.”

FROM STAFF REPORTS Shelby County’s unemployment rate dipped below 5 percent in April after hovering around the 5 percent mark... read more