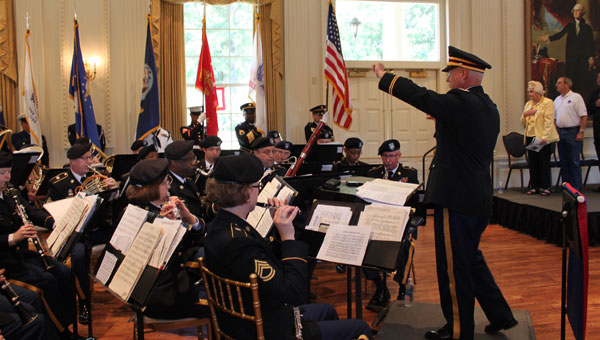 MONTEVALLO –Liberty Hall was standing room only as the 151st Alabama Army National Guard Band kicked off the Blue Star Salute at the American Village May 28.

“I’ve seen people gather all along the roads coming in (to the cemetery),” he said. “I’ve seen the hearse go by and seen ordinary folks like us wave a flag, shed a tear and salute. We will remember your fallen, to say thank you and to honor them with our own walks of life.”

Rachel Clinkscale of Gold Star Wives of America led the crowded hall in the Pledge of Allegiance, and the Montevallo Community Chorale sang each military branch’s song recognize veterans present.

Walker said Memorial Day, Veterans Day and Thanksgiving are the three holidays that should be recognized all year long.

“Why is it necessary for us to build memorials? It’s because we tend to forget. They will prompt our children to ask ‘Why?’ and ‘What does this mean?’” Walker said. “It’s because others have been grievously wounded that we owe them our remembrance and our thanks. For if we lose our memory, we lose our country.”

Alabama Secretary of State Beth Chapman said even eternal allegiance is not enough thanks for veterans and those who have fallen.

“I have all the confidence in the world that God has a special place in heave for those who served,” she said. “Not all are called upon to pay the ultimate sacrificed, but all were willing.

“We give you more than flowers,” she added. “We give you our eternal gratitude and the love and respect of the entire nation.”