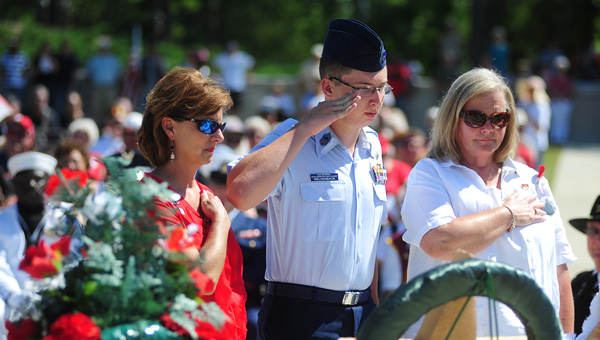 Charon Rivers, Justin Welkenback of the Civil Air Patrol and Adrienne Bourland salute the wreath commemorating the United States Marine Corps during the Memorial Day events at the Alabama National Cemetery on May 28. (Reporter Photo/Jon Goering)

“As we gather on this setting, we pause to pay our respects and honor the fallen,” said Kimberly Wright, director of the National Cemetery Association Office of Field Programs. “We honor the fallen and thank them for giving us freedoms we have and the way of life we have today.”

News anchor David Baird served as the master of ceremonies. According to Baird, the Alabama National Cemetery holds 1,550 military personnel and their family members. The 479-acre site, once fully developed, will hold 200,000 veterans and family members.

The Shelby County Girl Scouts of America led the Pledge of Allegiance, and U.S. Rep. Spencer Bachus, R-Alabama, spoke of the military’s legacy.

Major General George Bowman, retired of the U.S. Army and Jefferson County Commissioner, thanked everyone who “has ever worn a uniform.”

“What is a veteran? By definition, it’s someone who is experienced, seasoned and battle scarred,” he said. “They serve in the rain, snow, desert, jungle, mountain and anywhere this nation needs. They say, ‘I will go wherever and whenever my nation needs me to go and I will do whatever my nation asks me to do.

“Whenever the nation makes a call, they answer,” he added.

The cadets of the Civil Air Patrol assisted family members in laying wreaths in memory of each branch of the military.

The ceremony concluded with a 21-rifle salute by the Army National Guard Military Funeral Honors, “Taps” by Staff Sergeant Terrell Binion and Gene Ramsay and a flyover by the 100th Fighter Squadron, 187th Fighter Wing.