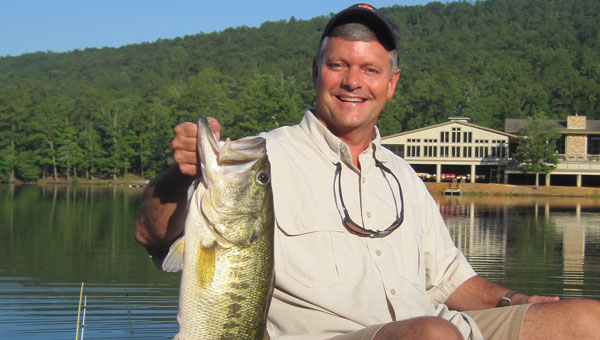 Bill Granberry of Richo Business Solutions shows off the prize-winning largemouth bass on Lake Alice at KPC at the 2011 tournament. (Contributed)

Lake Alice is located at Kanawahala Program Center, a Girl Scout camp in Chelsea. Proceeds from the tournament, dinner and silent auction will benefit the Girl Scouts of North-Central Alabama.

“We used to do it every other year, but the past three years, it’s been an annual event.

It started in 2004,” said Hilary Perry, director of communications and advocacy. “In 2010, we started having it every year. We renamed it in honor of Bill Ireland. He was a wonderful Girl Scout supporter.”

The tournament will begin at 6 p.m. June 22 with a Captain’s Party, which includes a silent auction and diner. The auction will include vacations in Pigeon Forge, Tenn. and Panama City, Fla., as well as golf packages, jewelry and more.

Perry said at least four more teams can join the tournament, which kicks off June 23 with a 6 a.m. breakfast. Lunch will be provided, and an award presentation will follow the tournament. Overnight accommodations are provided as well.

Sponsorship levels range from $500 to $2,500. Fishing only is $500. Prizes will be awarded for bass weight and all other species including catfish and bream. Small fish may be iced or put in live wells, and fish longer than 14-inches must be released back into the lake. All other fish may be taken home. No live bait will be allowed, according to a press release.

For more information or to become a sponsor, contact Leah Beth Downs at ldowns@girlscoutnsca.org, 800-734-4541 x1030 or visit Girlscoutsnca.org/fishing.