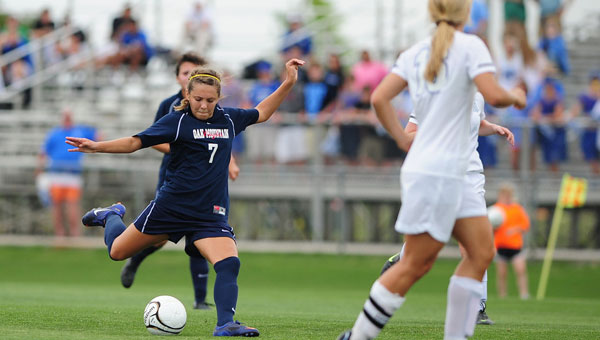 Oak Mountain High School senior Bailee Harnett knew the Gatorade Player of the Year in the state of Alabama would likely come from the Eagles’ roster.

With several talented players to choose from, the panel selecting the individual could have easily put on a blindfold and tossed a dart at the roster and landed on a qualified candidate.

Harnett, who earned the award following her senior season, didn’t care if she was the award-winner. She just wanted the honor to be bestowed upon an Oak Mountain player.

“I would have been happy for anyone of us to win it,” Harnett said. “I couldn’t do it without my teammates and coaches. It’s a really special thing.”

Harnett scored 29 goals and handed out 34 assists as a senior, which eclipsed the previous state record of 29 assists.

Harnett said teammates such as Vicki Hill, Haley Gerken and Toni Payne, among others, helped her develop her soccer skills as a midfielder and a forward.

“They would make me look good sometimes,” Harnett said. “If I made a bad pass, they caught up to it.”

Harnett said she will forever cherish the memories she experienced in her final season at Oak Mountain. The Eagles captured their first Alabama High School Athletic Association Class 6A girls’ soccer championship in school history during her final year.

“It was a really special year,” Harnett said. “I wouldn’t trade it for anything.”

Harnett will now head to Colorado Springs, Colo. to embark on a collegiate playing career at the Air Force Academy.

Harnett, who reports for boot camp June 27, said she can’t wait to join her future teammates at Air Force.