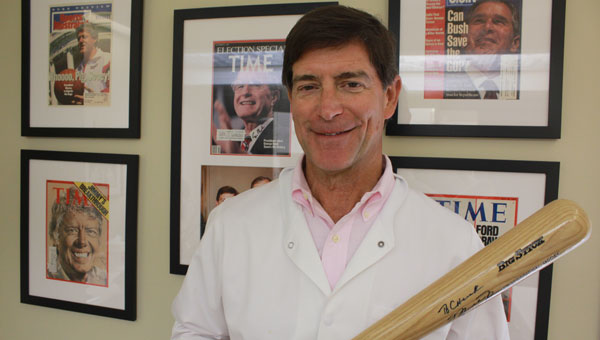 Ellis said his office is divided into sections, such as the astronaut section featuring Buzz Aldrin and Neil Armstrong, and a rack of baseball bats sporting the scrawls of Michael Jordan, Alex Rodriguez, John Grisham and many more.

Ellis graduated from the University of Alabama at Birmingham dental school under the tutelage of Dean Dr. Charles “Scotty” McCallum, of whom Ellis called his “dean, mentor, colleague, but most of all, my friend.”

Ellis said he offers interdisciplinary dentistry, which includes collaboration with Vestavia orthodontist Dr. David Sarver and other dental health professionals. He said he offers a patient-centered practice, and one way he relates to patients on a personal level involves his extensive autograph collection.

“I have a patient who’s a huge Barry Manilow fan,” he said. “When this girl comes in, I put Barry Manilow in the room she’s getting her teeth cleaned.”

Ellis began collecting autographs at 9 years old with his father while attending sporting events in Miami.

“Dentistry is my profession, and autograph collecting is my hobby and my passion,” he said.

While Ellis graduated from the University of Alabama, he keeps autographed Auburn University memorabilia as well. He said there is no distinction when autograph hunting, only the level of the celebrity. 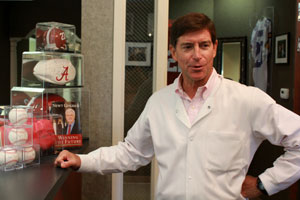 “You have to have a certain level of celebritism for me to get your autograph,” he said.

For many of his autographed photos, Ellis takes the photo, rushes to have the picture developed or, more recently, printed, and then returns to the celebrity event for an autograph.

Ellis met Tyson before an autograph show last summer. He noticed the boxer sitting at the hotel bar eating oatmeal early in the morning. As people began to notice Tyson, he finally stood up and said he wouldn’t take any more photos.

Ellis said he went to his room and collected three “Dr. Chuck” toothbrushes. Ellis told Tyson’s assistant that he would trade the toothbrushes for a photo with Tyson. Tyson laughed and agreed, even posing with Ellis and holding the toothbrush up for the camera.

“It doesn’t matter how rich and famous you are, everyone needs a toothbrush,” Ellis said.

His collection features 2,500 autographed baseballs. He also has autographed photos from seven of the past nine presidents. He said he is only missing Ronald Reagan, which he can’t get, and President Barack Obama, which he hopes to secure.

When former President George Bush visited the area in 1998, Ellis, knowing Bush was a baseball fan and former captain of the Yale baseball team, took photos of Bush in baseball uniform. Bush stopped, while surrounded by secret service agents, and told Ellis about the history behind the photographs, including a photo with Babe Ruth.

Ellis offered a few tips for anyone hoping to score autographs.

“Be polite,” he said. “Realize you may not catch them at the best time. If they turn you down, say, ‘I’ll catch you at a better time.’ I’ve had people turn around and give me an autograph because I was polite.”

Secondly, Ellis said you have to ask for the autograph.

“I’ve never had anyone come ask if they can give me an autograph,” he said, laughing.

Ellis’ dental office is located at 6930 Cahaba Valley Road in North Shelby. For more information about his services, call 991-7840.

By NEAL WAGNER / City Editor A Pelham man and a Hoover man were pronounced dead on May 30 after... read more