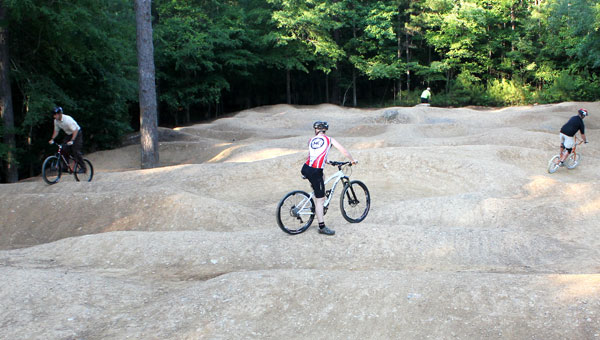 PELHAM – Oak Mountain State Park has opened up a new set of bike courses that will offer more opportunities for bikers interested in bumping and grinding.

OMSP Superintendent Michael Jeffreys said that the new tracks, dubbed Jekyll & Hyde and Lightning, will be both challenging and fun at the same time.

“I think between the two it gives us an option to provide more technical trails for our guests,” he said. “It makes it more completive on a national level as well.”

“The new trails help us mix up the mileage,” he said. “It also helps us add new events like Air Downhill Race on the Lightning track.”

The park will host its annual Bump N’ Grind race on June 1-3 and Muro said that both of the new tracks will be used in this year’s event. The Lightning track, which spans about one mile, will host the Air Downhill race. The event’s main race on Sunday will take partly place on the Jekyll & Hyde track.

Jeffreys said that although these tracks are open to the public, he would recommend some level of training before tackling both, especially Lightning.

“Just about anyone can ride Jekyll & Hyde even though it is a change of pace and terrain trail,” Jeffery said. “But I would advise those wanting to ride the Lighting course to always wear a helmet and getting with an experienced rider before taking it on.”

The park’s new tracks did not come cheap. Much of the contributions would not have been made possible without the help from the Federal government. About a $100,000 grant was given to the Oak Mountain State Park that was allocated from the state.

But the real heroes Jeffreys said were the countless volunteers from BUMP who helped contribute to the building effort.

“Without these grants, there would be no chance to add the park,” Jeffery said. “But more important, without the volunteer help from BUMP, these trails would not have been completed.”

Payne set up for greatness