Payne set up for greatness 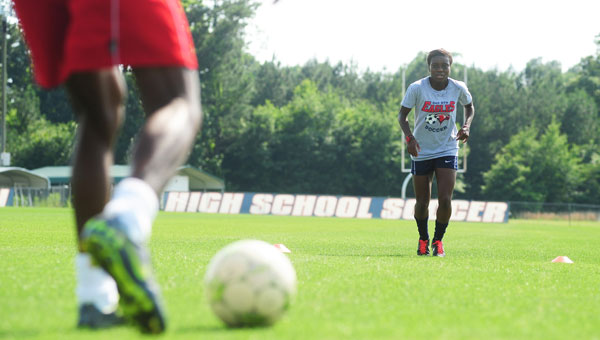 NORTH SHELBY — Along the Alabama 119 corridor resides a player who is not only a standout in her county, but in her country as well. But Toni Payne will tell you no matter how much of a rising star she is, she remains grounded in humility.
“It’s such an honor to go out there represent my country,” Payne said. “To go out there and wear the crest is just an awesome feeling, but I am just focused on playing to my full potential and helping my team in every way possible.”
Payne, 17, recently returned from international play with the United States U-17 women’s soccer team in Guatemala, in which she scored two goals and recorded two assists. Payne also plays soccer for the Concord F.C. in Atlanta. Many close to the Birmingham native said she is a rising star in her sport, including her father and personal trainer, Okyeleke.
“There is no one that I have seen in a class quite like where Toni is,” the elder Payne said. “Her ball dribbling skills and touch on the ball is exceptional. Not many coaches know how to coach the skills Toni has.”
However, one of the few coaches who know how to coach such a talented player such as Payne is her high school coach, Pete Dakis.
“Toni is such an unselfish player,” Dakis said. “She is phenomenal at setting up her teammates and is always looking for an opening.”
Dakis also said Payne’s leadership skills, especially heading into her senior year, are key factors in how she operates.
“Toni is expected to be a leader on and off the field,” he said. “That is why she will be a captain going into next season, because she has to this point exemplified being that type of leader.”
Toni’s father said that ever since she touched a soccer ball at the age of 5, she has translated the values she has learned at home onto the field.
“I think Toni takes what she learns from her coaches and her family,” he said. “And she puts that all together into one phenomenal playmaker.
A mixture of family values and soccer runs deep in the Payne family. Originally from Nigeria, Oyekele played for the Shooting Stars F.C. youth development league before coming to the United States in 1990.
“I love my native country, but when I came to America I saw new opportunities,” he said. “I am very blessed and thankful to have been given the opportunity to have come here and raise my family in this wonderful country.”
Payne’s younger relatives are trying to follow in their older sister’s footsteps of greatness. Stephen Payne, 14, is currently attending Lake Forrest Academy in Chicago where he is also part of MLS’s Chicago Fire youth squad. Nicole Payne, 11, is just getting started in soccer.
“I just want to be a good example for my brother and sister,” Toni said. “I would say that is one of my main goals in life.”
Committed to play colligate soccer at Notre Dame, Payne said she plans to visit her brother frequently, considering Chicago is less than two hours from the university. But for now, Payne said she remains focused on being a leader in the classroom and on the field.
“I want to one day play pro in Japan or Germany,” she said. “But right now I am going to be dedicated and focused on this upcoming season and hopefully bring home another state championship.”