COLUMBIANA — Jenny Wilson, who for the last year and a half has championed the cause at the Shelby County Humane Society, begins a new job June 1. 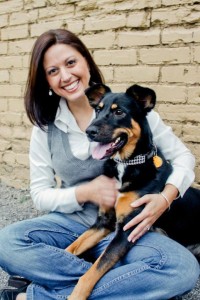 Wilson is going to work as director of resource development of Mitchell’s Place, a non-profit organization that provides a variety of services for children with autism.

“Truly, our biggest accomplishment is last year we had the highest adoption rates we have had in the last six years,” Wilson said.

“I think that’s the result of a kind of collaboration of a number of things, like reduced adoption fees by more than half, running adoption programs on a regular basis and really working hard to get in front of the community.”

Perhaps Wilson’s biggest contribution to the animals of Shelby County is one she earned as an individual. Wilson and her dog, Honey Belle, was selected the grand prize winner in 2011 of the Beneful Dream Dog Park contest.

Because of Wilson’s winning entry, Beneful is constructing a $500,000 dog park, which is scheduled to open July 12 in Alabaster’s Veterans Park.

Wilson has been involved with the Shelby County Humane Society for more than four years. Before becoming its executive director, she served on the Society’s board of directors.

“I will continue to be involved with the Humane Society, even though I’m not working there. Our organization has come a long way, but we have even more to grow on. We have a wonderful staff at the shelter, who will continue to work day in and day out,” she said.

The Shelby County Humane Society, which operates the county’s only animal shelter on McDow Road in Columbiana, operates with a paid staff that fluctuates depending on the number of animals at the shelter.

During the spring and summer, when the population at the shelter is at its highest, the number of staffers may be in the neighborhood of 30 or so. However, in the winter, the number of paid staffers drops significantly.

“There are no vacation days and no holidays when you have hundreds of pets to take care of. When others are enjoying holidays like Memorial Days, our staff is taking care of animals,” Wilson said.

She said Sara Shirley, director of operations, will be in charge at the Shelby County shelter until a new executive director is named.

The shelter and Humane Society depend on volunteers to operate.

“Our volunteer base fluctuates, but we have about two dozen solid volunteers, who perform a number of tasks for us, like taking photos, walking the dogs, bathing the dogs, socializing the cats and helping with special events. Whatever a volunteer’s particular skill set, we’ll put that to work. For instance, we have one volunteer who does all of our graphic design,” she said.