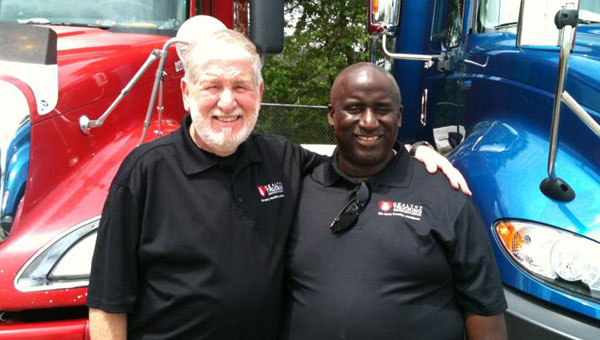 HTAA President Rusty Schoenfeld with truck driver and HTAA spokesperson, Glenn Keller Sr., at the April Health and Wellness Summit in Atlanta. Behind them are two of the new 18-wheeler trucks provided to HTAA by truck manufacturer Navistar, a HTAA sponsor, for use by Keller, who is one of the “Lucky Seven” in CNN’s Fit Nation challenge. (contributed)

“After hearing that over the road professionals now have an average life expectancy of less than 60 years, I was concerned and wanted to know what I could do to help them change this,” said Rusty Schoenfeld of Chelsea.

So, after 35 years with the Bell telephone system, working his way up from technician to executive vice president running a $300 million dollar division for BellSouth/AT&T, he retired and joined the Healthy Trucking Association of America (HTAA) in 2008.

Today he is president of the organization.

Its Driver Vitality Program identifies a driver’s health problem, lays out a plan for the driver to follow, provides resources the driver needs, then rewards the driver for his or her efforts.

This year, as part of its Fit Nation program, CNN has selected seven viewers to train for the Nautica Malibu Triathlon. HTAA’s spokesperson and Premier Healthy Trucking Driver Glenn Keller Sr., a Texas truck driver and over-the-road minister, has been chosen as one of the “Lucky Seven.”

Keller stands 5’6” and weighs more than 300 pounds. “It’s only by the grace of God that I’m not suffering with hypertension or diabetes,” he said. “When I saw the Fit Nation challenge, it seemed like an excellent way to get fit while being held accountable.” His goal now, he said, is “To get in shape and spend my life encouraging others to do the same.”

Each year, the HTAA holds a Healthy Trucking Summit — a health and wellness event and a source of education and resources aimed at improving the health of our nation’s professional driver population. This year the Summit was held April 24-26 in Atlanta.

“We have at least a booth at all major trucking shows,” Schoenfeld said. Their next show is a Healthy Trucking Pavilion at the Great West Truck Show in Las Vegas June 14-16, he said.

They also work with state trucking associations to reach more drivers. Their goal is to reach every driver in the country with their health programs.

Bob Cain looks out over the beautiful valley at his Deer Valley Golf Course in Chelsea. (Contributed) By SHELBA NIVENS... read more