For birthday, girl giving, not getting 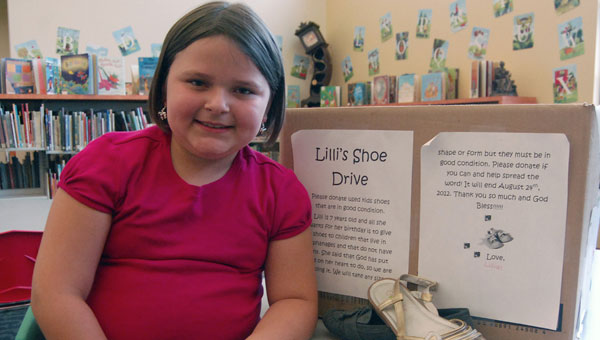 CALERA – In January, 7-year-old Lilli Kemp told her mother she would rather donate shoes to children in need for her birthday than have more presents.

“I knew that there are kids with no parents in an orphanage and people at orphanages hardly have any money,” she said. “It just touched my heart.”

Audrey Kemp, Lilli’s mother, said she and Lilli were walking into Walmart when Lilli mentioned the idea “out of the blue.”

“I teared up and couldn’t tell her no,” Audrey Kemp said.

The Kemp family, including Lilli’s father, David Kemp Jr., began spreading the word in January, and they have between 75 and 150 pairs of shoes from family and friends, Audrey Kemp said.

Lilli Kemp, a rising third grader at Calera Elementary School, will celebrate her eighth birthday on Aug. 25. Audrey Kemp said they’re planning on having a pool party, but asked friends to bring shoes instead of gifts.

“My friends are really excited I’m doing it,” Lilli Kemp said. “Most are Christians, and they know we should be doing it, so they’re excited too.”

“You don’t have very many 7-year-olds who will give up their presents and special time to help other children,” Audrey Kemp said. “She’s an average kid with a little extra ‘umph’ in her.”

Anyone interested can donate shoes and socks at the Roy Downs Memorial Calera Library, located at 9700 Alabama 25 in Calera or Hot Headz salon at 741 Middle St. in Montevallo. You can also email Audrey Kemp at mrskemp2010@aol.com for pickup.

One of the first groups takes the course at the Bump 'n Grind mountain bike race June 3 at Oak... read more